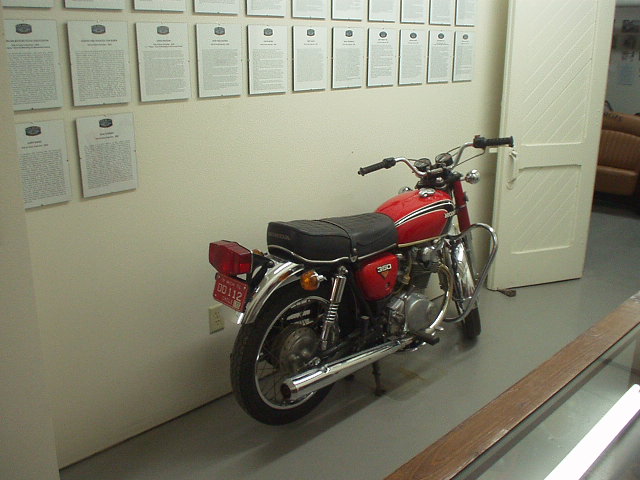 This year I had the pleasure of finishing two books (which I highly recommend!) entitled Leanings and Leanings 2 by one of my favorite authors, Peter Egan. These books include Peter’s essays and feature articles for Cycle World magazine and are a tribute to all things involving motorcycles.

It was fortuitous, then, that after his stories had aroused my interest in these two-wheeled motorized creations that I’d have an opportunity to visit Sturgis, the “motorcycle capital of the world.” This small town is just 14 miles east of Deadwood, where I ran a marathon. The first week of each August about 500,000 bikers from all over the world converge on Sturgis, mainly for its motorcycle rally, but also to watch motorcycle racing. Suitably, there is also the Motorcycle Museum / Hall of Fame there, which is open year-round. It was this that I went to visit on a beautiful June weekend.

The museum at first seemed smaller than expected, but I suppose I had imagined something the size of a typical automotive museum. Such thinking was silly, of course, considering that in the footprint of one automobile one can park maybe 4-8 motorcycles. There were plenty of motorcycles to see, though they primarily included old American motorcycles. Harley-Davidsons and Indians were predictably prevalent. Excelsior and BSA also had good representation. Downstairs there were some Triumphs and Hondas, but not much of else.

Sport bikes (at least the modern, faired ones) got NO representation whatsoever, so do not go there expecting to see Kawasaki Ninjas or Yamaha R1s. Then again, for the Sturgis crowd (whose annual rally, I imagine, consist of primarily cruiser bikes and their older, tatooed owners), the mix of bikes here was probably just about right. I myself am not really into the heavy American cruisers, however (part of this may be I find it hard to imagine myself developing a tight bond with the aforementioned tatooed Harley crowd). Instead, I found myself attracted to the classic lines of a Honda CB350 from the 1970s. “You meet the nicest people on Hondas,” was Honda’s ad slog in the 60s. All of the Beach Boys’ Honda songs probably made an impression on me during my youth too (at least for motorcycles; in contrast, I find it hard to get too excited about their cars no matter how good they are.)