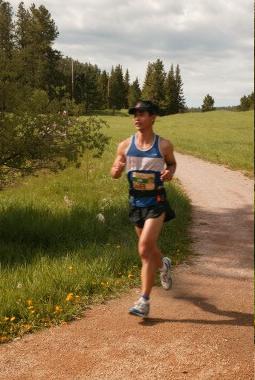 The course was to be undulating, with a 1200-foot ascent starting shortly before Mile 1 and ending at roughly Mile 13. The Mickelson Trail consisted of dirt and gravel, a type of terrain I’ve always regarded as slower than pavement. Most of all the race was just one week after the gruelling 52.4-mile Rocky Mountain Double Marathon, an event that one would think should take a few weeks to recover from. Clearly, then, the Deadwood Mickelson Trail Marathon was a race that I should not have been doing for time. Conventional wisdom dictated that I should just aim to finish, or maybe not even do the race at all.

“[Bleep] it,” I thought, as I looked out the window of the charter bus that was taking us marathon runners to the start in Rochford. The awe-inspiring Black Hills of South Dakota—considered sacred by the Lakotas—had seemingly lit a fire within me this weekend with its stunningly lush and ponderosa-laden views.

“Forget conventional wisdom. My legs are feeling good, and the scenery is too spectacular to be giving anything less than my best.”

“I am going for a personal record,” I resolved.

In the next few hours I would find out whether these thoughts were full of warranted optimism or naiveté.

Recalling how after last month’s Colorado Marathon I had concluded that “conservation of energy is overrated,” I resolved that this time around I was going to run aggressively, right from the start.

This was underscored when, upon encountering a fairly steep downhill after, um, 3000 feet, I was practically sprinting past a dozen people. The first 2 miles passed by with me running 6:44 miles and then there were only about 20 people ahead of me. Suicidal pace? Well…

Surprisingly my body did not relent even as the course continued to go uphill, at least until about the midway point after which the uphill had gone on for many miles with little reprieve. In fact Mile 13 passed by with myself running only a 9:13 pace, and the halfway point clocking in at just under one hour 44 minutes. A sign of things to come? I breathed easily as I knew the second half would offer plenty of downhills. It relaxed me to think that gravity would become my friend very shortly, instead of a foe.

My form remained surprisingly good as I reflected upon how the Mickelson trail—instead of slowing me down considerably—seemed to be helping as it transmitted less impact to my body than roads. The trail was wide and superbly groomed with few irregularities or puddles. In addition, running through the forest—which was kind of like a cross between the Pacific Northwest and the Great Smokies of the South—made for the most beautiful marathon course I have done to date.

People began to pass me in the second half, which somewhat surprised me. According to my watch and how I was feeling, I wasn’t really slowing down? What I did not know at the time was that many of these people were on relay teams with fresh legs. Ignorance can be bliss, however, and it motivated me to keep up the pace.

I had enough gas in the tank left and after Mile 26 I commenced my sprint. This final stretch turned out to be just about the only pavement the race went on since the beginning. The finishing chute was a welcome site. As I crossed the line I looked down at my watch: three hours, 32 minutes and change.

So no P.R. today. But my second best time to date! On a course more difficult than the other “fast” marathons I have done. Furthermore, this was my best marathon placing ever (30/375, or 92nd percentile). Surprisingly, just one gal beat me this time, and only by 38 seconds (what happened to all you women today?)

So it turns out the Black Hills had imparted its magic in me, and I wasn’t being exactly naive earlier in the morning. Conventional wisdom was the only loser this weekend.

Official results are here. A summary: