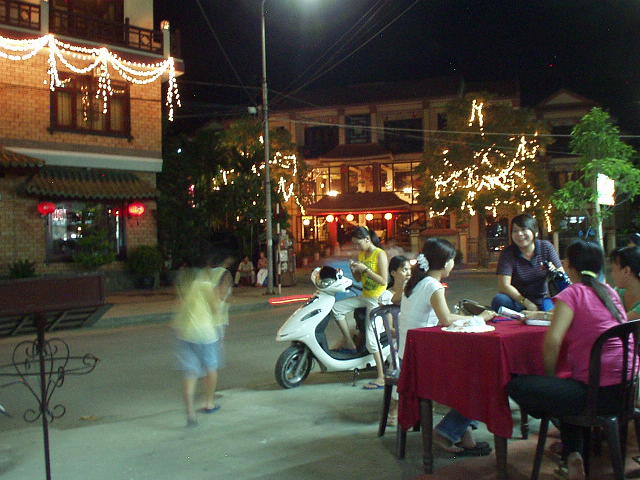 I was on my way to the Ho Chi Minh Airport on the back of a scooter darting in and out of traffic, literally inches away from cars and other monstrosities going 30+ mph, when a thought came to mind. Perhaps traveling al fresco with an overstuffed, 25-lb Gregory Forester pack on my back in 90 degree heat was not one of my most brilliant ideas.

“It is amazing,” I thought to myself, “that I have yet to witness a single crash here.” Somehow I don’t think my insurance agent would have appreciated the sight of me clutching onto the motorbike’s seat rails for dear life in this sea of motorized disorder, and suddenly I was wishing for a helmet even though absolutely nobody dons one here.

That said, the trip to the airport was well worth it. (Please remind me to take a taxi next time, however.) This is because as I stepped off the plane in Da Nang, I was elated to see something as lacking in Ho Chi Minh City as a motorist who drives in a straight line: lush countryside and jagged mountaintops.

I walked right through baggage claim when I saw a person holding a sign with my name on it in big letters. So much for wondering if the tour company would successfully find me. He led me to an air-conditioned car—something appreciated considering it was 99 degrees Fahrenheit outside—as I asked him what was his name. His reply sounded something like “Sir.”

That was about all of the wordage coming out of his mouth for the entire 45-minute ride to Hoi An. Instead, “Sir” communicated with the car horn. “Toot-toot” was a sound he loved making especially as he raced towards a scooter at twice its speed. “Toot-toot” was not necessarily meant to be interpreted as “get off the road, damn it” but rather, “just to let you know, I am approaching in a vehicle much larger than yours!”

Aside from the horn-honking, the ride was both peaceful and uneventful so I got a chance to gaze at the countryside. Everything—from tall grasses to leafy trees and healthy crops—was green. In contrast to the city I was in the last couple of days, the land here looked almost untouched, merely speckled with a few buildings here and there. Some of the homes with colorful stucco walls could have looked at home in 19th century Spain. The motorbikes cruising down the roads were about the only sign that we were in the 21st century.

That is, until we arrived in the city of Hoi An. Here, capitalism was thriving, with clothing stores comprising the majority of shops. Restaurants, tour offices, internet cafes and karaoke joints made up most of the rest. The town was neat and orderly with a notable dearth of beggars. Even the food stand vendors and motorbike drivers seemed markedly less aggressive than those in Ho Chi Minh City.

Services and everyday items were remarkably inexpensive here (as is most places in Vietnam). Here is a sampling of prices:

A scooter driver who drove me from the harbor to my hotel perhaps summed up Hoi An best. “It is very hot, but cheap, quiet, and beautiful,” he said. His statement was simple and succinct, just like his hometown.