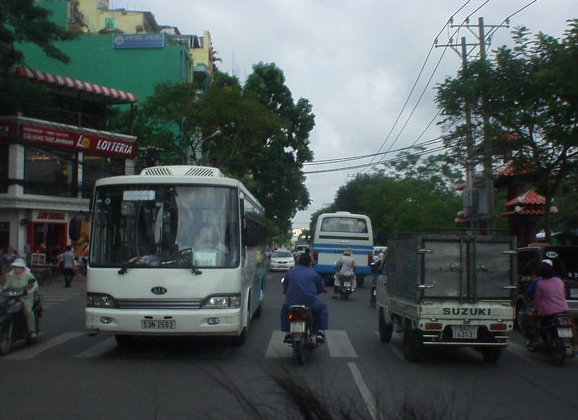 I woke up, pronto, at 6:45 a.m., bursting with energy despite watching TV from 1:00-3:00 a.m. (so my internal clock is still a bit off). As I peered over the balcony rails and watch scooters zip on by with an sporadic toot-toot, I thought to myself, “this is going to be a good day…”

A good day it did turn out to be. Here are some notes from Day 2 in Ho Chi Minh City:

After taking a warm, refreshing shower I hopped into an elevator to go down to hotel breakfast. In the elevator was what turned out to be a high school senior from Australia. Immediately we struck up a conversation and continued as we sat down at a table together for some food, when her other tour mates came in and sat down at the table and I found myself surrounded by five Aussie teeny-boppers.

Actually, they were super friendly (which reminds me that I need to put Australia down on my list for future countries to visit). One was popping anti-malaria pills as a precaution, and another one gave me a tip for a place with free-delivery pizza and pasta. In addition, in the midst of our conversations, I picked up a few Australian terms, including:

But enough of that. This is Vietnam after all! So I was about to go exploring when I ran into Loan in the lobby. Apparently, she and her husband Chuc were here to take me to a tour company where I could pick out a tour somewhere else for the next few days while they tended to their family.

The tour company was only about a mile away but since Loan and Chuc drove a scooter, they hailed a scooter ride for me. Of course I was willing despite this putting me directly in the Zone of Chaos (i.e. virtually any street in Ho Chi Minh City). This ride cost a whopping 5,000 dong, or about 32 cents. Almost cheaper than walking. We managed to avoid pedestrians, other scooters and, more importantly, buses and cars that were two feet to the sides of us.

At the tour company I decided upon a 6-day tour of Central Vietnam (Da Nang/Hoi An/Hue), which included airfare, hotels, breakfast, buses, and boats for < $270. Not bad. The tour starts tomorrow! I'll leave it at that since I will be writing about it over the course of the next few days. When I got back to the hotel I stopped by an internet terminal when I heard opera music in the background. I turned to the caucasian person next to me and said, "I didn't expect to hear Andrea Bocelli here..." She then looked at me and perhaps somewhat in surprised at my good English, started telling me a little bit about herself. Turns out she was from Littleton, Colorado, just about 70 miles south of where I live in Fort Collins. Her daughter almost went to college in my town. Small world. The rest of the day was primarily walking, sightseeing, and eating. I will save comments regarding the latter for a future post about food in Vietnam. In due time (e.g., when I can access a free wi-fi signal so I can upload photos more easily from my own laptop) I will post photos about the former. Sites visited included 23/9 Park, Backpacker Area, the periphery of the Reunification Palace, Tao Dao Park, the Notre Dame Cathedral, the Center Post Office, and the Saigon River. Perhaps unsurprisingly, I enjoyed the parks and nature areas the most. Walking by the Saigon River near dusk was also very enjoyable. Actually, I kind of like the entire city of Ho Chi Minh. It's not a place I'd like to live in, but it has a vibrancy and character that makes it worth visiting. Good thing I will have a few more opportunities in upcoming weeks to check the city out more.

Good deal Felix! Sounds like you're off to a great start! I can't wait to hear about your Central Vietnam tour!

Talk to you later,

Thanks for the posts! I'm keeping my eye on your webpage, as I can at least live vicariously from my desk... ↩Reply