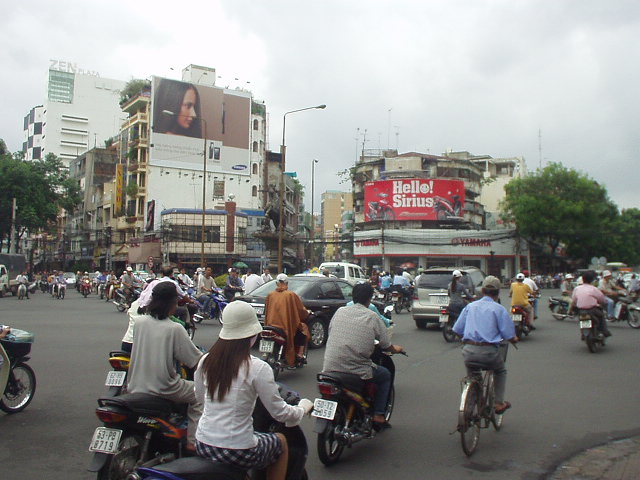 We made it. After arriving at the San Francisco International Airport, I almost immediately ran into my friend/former co-worker Loan, her family, and her friends’ families. Together we flew to Vietnam on EVA Airlines (an excellent airline with good service, food, and real silverware) with a two-hour layover in Taipei, about an 18-hour journey that flew by for me since I was sleeping 80% of the time. It was from Ho Chi Minh City (a.k.a. Saigon) that the adventure began.

First there was the order of getting through customs. Surprisingly, this went surprisingly well considering that Loan’s immediate family of five people had twelve check-in items and at least five carry-on items (versus my one carry-on and no check-ins), in part due to some airport official taking care of the six of us the moment we stepped off of the plane. How we managed to get such personalized service is beyond me. That we also did not have to pay a US$20-25 entrance fee or bribe is also curious considering that some friends who had been to Vietnam before had to. On the entrance papers I just declared my electronic items and books and I was given no problems and asked no questions.

From the airport we split up. Loan and her family were going to stay with her mom who lives here, but Loan very thoughtfully reserved a room in a hotel and arranged for a driver to get me there. “Just follow him,” Loan said, nodding to a mustached man who only spoke Vietnamese. Loan and her family then left, and since there was really no way I could communicate with the man, I really hoped he had understood Loan’s instructions. Ten minutes later the man handed me off to another guy, who led me to a car and asked me to get in. Okay! I was actually very relaxed and trusting during all of this time, but occasionally during the car ride I wondered things such as, “Who is this guy? Does he know where he is going? Will we get to the right hotel? Should I tip the guy? I only have U.S. dollars on me at the moment; what would be an appropriate tip?” And so on and so forth.

Never fear… after 30-40 minutes, the guy drove onto a sidewalk and led me into a hotel. As I started to pull out my wallet he waved me off, pointed to the counter and urged me to go on. The lady at the counter then said, “Ms. Loan has arranged a room for you…” Thanks, Loan! I owe her a lot of gratitude for getting me here.

The hotel (Hai Long 1) was fine, with US$25/night getting me a room with tile floors, TV, refrigerator, fan, air conditioning, flush toilet, tub, free local calls, and a view of the city from the seventh story. The hotel also has a restaurant, a couple of free internet terminals, and a wi-fi signal (for about US$16 for 24 hours, or free through some diplomatic negotiations). It is a tad noisy with all of the traffic blaring their horns outside, but I think that must be a pervasive problem that cannot be avoided from any hotel in this city.

Since I had a free afternoon I walked around the city for a little bit. Here are some first impressions: