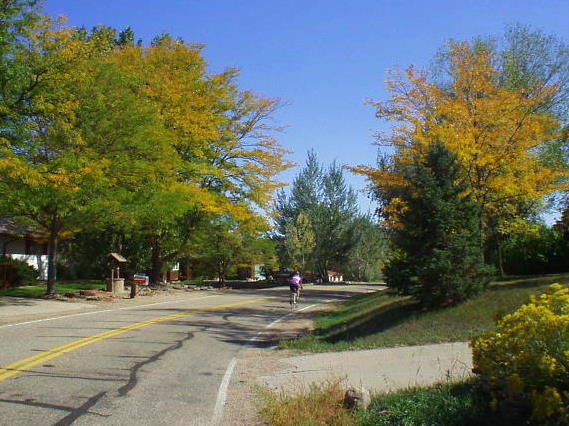 What possessed me to do such a thing, you might ask. It wasn’t just a case of being unable to count sheep to fall asleep, or having too much caffeine the night before. Actually, there were three reasons: 1) every year since 1996 I have ridden a double century and still needed to do one this year to continue that streak, 2) I was eager to check out the Colorado fall colors that had been exploding out of the trees as of late, and 3) it sounded like a much better idea than, say, working.

So I embarked on a rather unimaginative—but very beautiful—route up to just a few miles from the Wyoming state line, down to Timnath, back up towards Wyoming, down to the Horsetooth Reservoir and Carter Lake, and back home again. My bike—loaded with food and water—weighed 35.4 lbs. before leaving the house, but as most of the journey was flat with just enough short-but-steep climbs to keep me honest, the heft was not a problem.

In fact, the list of Things Gone Wrong is surprisingly short considering that the ride was entirely self-supported and I did not even have a clear idea of the route I was going to take until the night before.

The first issue had to deal with the ambient temperature. During the first few hours before the sun woke up, the thermometer on my handlebars read a hand-numbing 35 degrees. This was about as comfortable as sitting inside a freezer, so in order to distract myself between the teeth chattering, I began muttering to my bike in Spanish. Phrases I distinctly remember mumbling include hace frío (it is cold), hace MUCHO frío, (it is VERY cold), and quisiera que el sol se levante pronto (I would like the sun to rise soon). Also: ¡Necesito ir al baño! (I need to go to the bathroom!)

The second issue had to do with my lights. They worked brilliantly in the morning, but after sunset they started flickering like a candle in the wind. Fortunately, this did not result in getting hit by an unsuspecting vehicle or careening into a ditch.

Otherwise, the ride was super enjoyable and indeed better than working even if I accomplished little more than burning (according to a metabolically all-knowing friend) approximately 10,400 calories and snapping some photos of the beautiful Northern Colorado scenery.

All of the above seemed adequate to sustain me for the entire day.