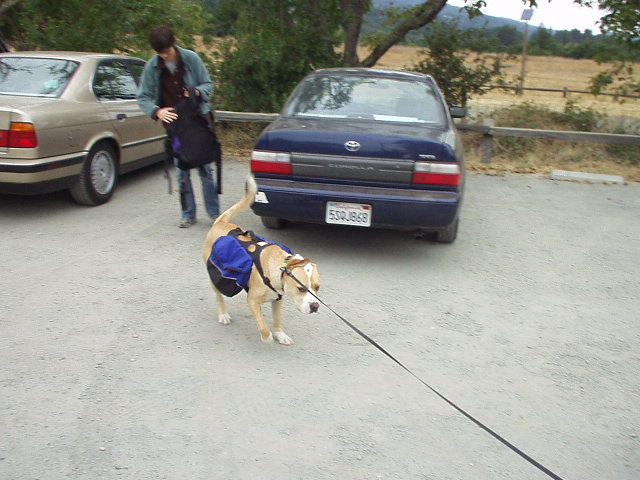 So yesterday I was planning on running 24 miles or so in preparation for the Chicago Marathon. Unfortunately, I finished short of that… way short. Excerpts from an email below explain the dilemma:

I have some complaints of my own… it is about running in the Bay Area! It sucks. Okay, so maybe that is overly harsh and written out of frustration, but I was just out there for 3 hours and 10 minutes, and could only get in 2 hours 30 minutes worth of running. (My original intention was to do 3:45 worth of solid running, but I just got too frustrated). These are my complaints!

After 14 miles I stopped by the house to pick up Bue (Adrian and Evelyn’s dog) to run with me for a couple of miles, but as it was drizzling, he didn’t want to go. So I didn’t walk him this evening (good thing because the drizzle turned to rain). I then ran alone on some trails about 1/2 a mile from where I’m staying that is part of the Rancho San Antonio park system, I think, but the yellow weeds were way overgrown and the trails were too hilly. After hitting some dead ends and it was raining steadily (and I was in my singlet) I gave up and headed back home.

I am now in jeopardy of trying to run a sub-3:30 marathon in Chicago without doing a single run longer than 2:35!!

It seems like my only hope now is if I can go back to Stockton next week and do a long run there. On the outskirts of Stockton where my parents live, there are little shoulders and numerous sharp-toothed Charles Manson-type dogs but there are also few cars and no traffic lights or hills. I never thought that Stockton was better than the Bay Area for anything but I suppose for long, flat running (also, time-trial training on a bike) it is.

As a note of clarification: I think trail running the Bay Area is pretty darn excellent—there are numerous hilly open space areas and dirt paths all around the entire bay—if you don’t mind driving to them. Finding flat, uninterrupted, carless stretches of pavement is the problem. I am looking for that because I need to work on leg speed more than leg strength for Chicago, so hilly trails don’t really cut the mustard. If anyone has any suggestions for this (especially near Los Altos), please let me know!

This is the route I took if you want to analyze what else I could have tried running on.

in your shoes, I would have hit the Stevens Creek trail where it ends at Yuba Drive (past the BMW dealership nearby El Camino/85), and run all the way up into the Shoreline Park und continued there (on the unpaved, but clean stretch) until you can see the Palo Alto airport. That's probably close to 10 miles one-way, all flat, no cars, with just a single stop light (at the Moffet Blvd crossing). With plenty of bird watching in the Shoreline Park for free!

Try the campus loop around Stanford...

I agree it's just 4 miles, so you would have to do it a few times, but it's rather flat and drivers are aware of runners and stop...you definitely have the right of way... ↩ Reply

Thanks! The Stanford loop could work (even if I'd have to go around it many times)... I didn't consider it yesterday because it is about 10 miles from here. I'll have to check out the Stevens Creek Trail... that might fit the bill. I will try to ignore the fact that it is right next to Highway 85! At this point, I can't really be too picky... ↩ Reply

Second the Stevens Creek Trail suggestion. Yeah, it parallels 85 for awhile but it's also right alongside Stevens Creek, so it's a fairly pleasant cruise. ↩ Reply