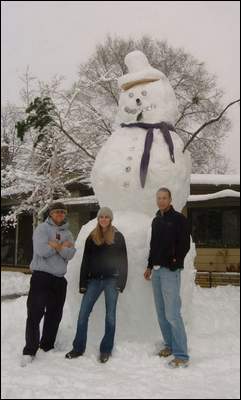 It only snowed three times here in Fort Collins this December, but the last two times (a full blizzard and then a snow storm) were unprecedented and left impressive amounts of powder in town. As we are back to our sunny Colorado skies again with no more major snowstorms looming in the 15-day weather forecasts, I wonder how much longer the snow piles outside will last.

The weather experts’ assessment of the snowfall after it was all done and over:

December 2006 could also be the snowiest month ever on record for Fort Collins, Heuer said.

For the month to date as of 7 a.m. Friday, Fort Collins recorded 38.3 inches of snow – a pounding when compared to the average total for December of 6.1 inches.

The season-to-date totals, which measure snowfall levels from Sept. 1 on, are also abnormally high.

From Sept. 1 to Friday morning, Fort Collins recorded 49.1 inches of snow – a high total when compared to the city’s average of 15.7 inches.

Somehow, this is all very comforting that this is not normal! Having so much snow once in a blue moon is pretty cool, but I can imagine it would get old pretty quick if it happened a lot more regularly like in other parts of the country and world.

One benefit of having snow: lots of snowmen around. Enjoy this photo taken by the Coloradoan of a one made by locals Brad Teets, Jamie Teets, and Galen Beem. It is more than double their height. Happy new year, all!

More Evidence the Recent Weather is Not Normal

This is the longest cold and snowy spell during the 58 years I have lived in Fort Collins.”

Last month was the first December I did not go golfing in my 58 years here.

The only blizzard I can remember that matched the amount of snow as the first blizzard we had in December was the blizzard of March 2003, and the snow then melted fast!

From a friend’s cousin who lives in Erie (25 miles north of Denver):

So those who are looking at all of my snow pics from the Blizzard of 2006, do not believe that Northern Colorado normal looks like this in December. It is indeed a rare treat.