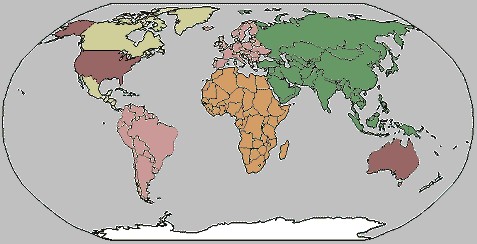 Now, I have a lot of respect for Colorado State University students here in Fort Collins. Most of the ones I have met seem a lot more knowledgeable and worldly than, say, a certain segment in society that sing Alan Jackson songs about not knowing the "difference in Iraq and Iran" and whose sole notion of culture is driving down to the local Taco Bell to pick up a bean burrito.

I was a little surprised, then, to see that 49% of CSU students polled last week could not point out Iraq on a map of the Middle East.

Well, I guess that is not that bad. That means that slightly more than half did know where Iraq is, which is better than most young people in the nation (~40%) and is a higher percentage than, say, the high school graduation rate of South Carolina. On the other hand, that also suggests that a lot of people have already forgotten ninth grade geography! No wonder we Americans are often the laughing stock of the world.

A refresher is in order, then. Thankfully, there is the Internet with numerous websites to help us out. Here’s a good one:

While it is technically a "quiz," it’s a good learning tool, and also quite fun.

I figure, by doing one of these quizzes a day for a week or two, one’s geographic prowess will be almost good enough to qualify for Jeopardy. My suggestion is to start out with the most basic (e.g., where are each of the U.S. states) and then working his way around the world.

Today I finished learning all of the territories in the Carribean. Those were kind of hard, considering that I hadn’t even heard of Anguilla, Martinique, Barbuda (not to be confused with Barbados, which is also in the Carribean) and several others before. I’m sure Africa and some of the whereabouts northeast of that continent will present another challenge to me. But hey, at least I can already identify Iran and Iraq!

How could anyone not have heard of Anguilla? How strange! :)