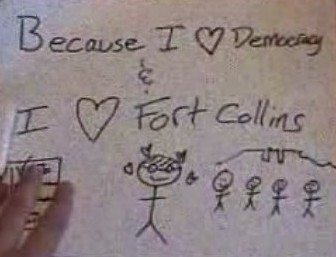 Our city just had its local election. There were a couple ballot questions containing legal mumbo-jumbo pertaining to leasing rights and annexation, plus some races for a few city council seats. And then there was the contest for mayor of Fort Collins.

Ah, the mayor. Doug Hutchinson—the incumbent—is exceptionally popular around here and by most accounts is doing a stellar job. In all conventional wisdom, to run against him is like trying to compete with Jessica Alba in the “Hollywood star most men would like to have as their girlfriend” department. You will lose.

But, Fort Collins is known as the “Choice City,” so of course we couldn’t leave him uncontested. Fortunately, 29-year-old Scott Van Tatenhove stepped up to the plate. Never mind that his budget for this race was a piggy-bank-breaking $20. Also never mind that his advertising campaign was a tad unconventional. Witness his You Tube commercials below; it is quite clear he did not bust his budget on them:

Amazingly, despite spending less than $20, he garnered almost 20% of the votes. We can only wonder about how many votes he could have gotten if he had managed to come up with, say, $40.

On a related note, there was a sarcastic blurb of mine regarding the recent election in the March 29th edition of NextNC, a weekly Northern Colorado publication. It is here (PDF, 862 kB).