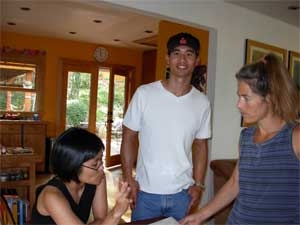 “I can’t believe that we get to visit Lynn Hill!” I exclaimed to Ann and Stacey who were visiting for the weekend.

Lynn Hill—for those who don’t know—is the Lance Armstrong of rock climbing and perhaps the most famous and photographed female rock climber in the whole world. In 1979, she was the first woman to establish a 5.12+/5.13 (Ophir Broke in Ophir, Colorado). She is probably most known for making the first free ascent of the Nose Route on Yosemite’s El Capitan in 1993—a feat not duplicated for 10 years. Very soon she’ll even be gracing the cover of the 30th Anniversary edition of Outside Magazine.

It turns out she is also a friend of Stacey. Hence, on the last full day of Ann and Stacey’s Colorado visit, we drove down to Boulder to a charming little home on the western slopes of Boulder, and voila—Lynn!

Actually, the first person we saw was her four-year-old boy, Owen. It was pretty hard to miss him, since he was running around completely naked. :O He was actually pretty funny to watch especially when he decided that he wanted to ride his bike. Lynn put a helmet on his head and I just thought it was hilarious that here was this kid riding a bike with a helmet but no clothing. I even openly mused, “shouldn’t he be concerned about protecting some other parts too while riding his bike?” but he basically refused until his father came by and made him get dressed.

Lynn herself was very cool. First she gave us a tour of her home which was nicely remodeled with lots of wood, granite, and glass. Then she looked through Stacey’s transplant journal (Stacey has transplanted lungs). She took a genuine interest in us, asking many questions while making great eye contact with her beautiful blue eyes.

Personally, however, I’d rather have talked about her. We were at Lynn’s place for about two hours and in hindsight I feel like I didn’t take full advantage of this opportunity to talk one-on-one with one of the world’s greatest climbers.

One thing I did talk to her about was regarding the places she had lived in. She was born in Michigan, grew up in Southern California, and lived in Bend, Oregon for a couple of years but found it too isolated. She then spent several years in Italy and France before moving to Boulder 3-4 years ago, where she has been raising Owen. She still travels quite a bit to climb, but not nearly as much as before she had her son. “I’ve accepted this is a time in my life where I can’t travel as much, at least until Owen is in school,” she said.

Due to living overseas quite a bit, she’s fluent in French and Italian and knows a bit of Spanish as well. In fact, while we were chatting one of her friends visiting from Italy wheeled over to the house on Lynn’s bicycle, and they started conversing in Italian.

We also talked a little bit about mental endurance—a subject she had just blogged about. I do wish I had asked her more about her training regimen, though. She is RIPPED! At the same time, she is very pretty too!

Despite all of fame and success she came across as very down-to-earth and easy to talk to. Yet, just being there with her that evening was somewhat surreal to me, and at one point I couldn’t help blurt out, “This is amazing… I can’t believe I am here talking with Lynn Hill in her own back yard!”

She just smiled. And so did I, as it’s not every day that I can spend an evening with a legend.

August 7, 2007 Tue: In Lynn Hill’s blog, there’s an article about the Wind Song Foundation, including a photo of my friend Stacey and me with Lynn. The Wind Song Foundation was founded to raise funds and awareness for Stacey’s plight with lymphangioleiomyomatosis (LAM), which culminated in a double lung transplant three years ago. Lynn helped Stacey’s cause by very generously donating autographed videos dubbed “Free Climbing the Nose,” which were offered to high donors.