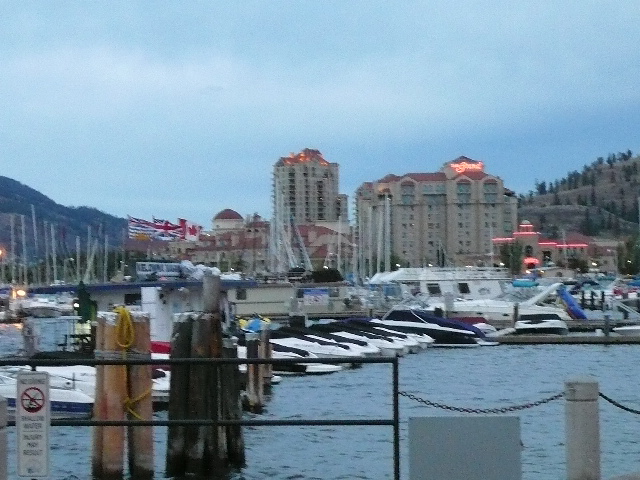 Much of what I wrote about Penticton applies to Kelowna—just 40 miles north—with a few differences.

Whereas Penticton is a small, cute town, Kelowna is a much larger city. It has about 130,000 people in the city proper, and it’s the third largest city in British Columbia and 22nd largest in Canada.

Considering its dry, temperate climate, lake access, and numerous wineries, it may not be a surprise that it is also the second most expensive housing market in the country after Vancouver. It’s also one of the fastest growing cities in North America.

Unfortunately, that is all of the trivia I can provide for you. Lisa and I didn’t really hang around Kelowna long enough to do much more than sleep here (since there was no available lodging in Penticton due to all of the Ironman athletes there that week), but I can talk a little bit about one important travel-related item: restaurants.

There seems to be plenty of them in Kelowna, with the exception of Mexican. At least we couldn’t find one by just wandering around. For those of us who live in California or Colorado and are accustomed to seeing one every five blocks (even when you exclude Taco Bell), that was strange!

Of course, it is not weird when you consider that the number of French-speakers in Canada far outnumbers the number of Spanish-speakers. And I’m sure several Mexican restaurants exist in Kelowna. I say that because the town even has a Dutch one!

We had breakfast at a Dutch chain specializing in Pannenkoeken. What are Pannenkoeken, you might ask? First, let’s go over the pronunciation: “pan-eh-kook.” (The ‘en’ is silent; don’t ask me who came up with Dutch pronunciation and spelling rules.) Pannenkoeken are like American pancakes, except they are thinner (and larger) and sometimes incorporate slices of apple, bacon, or raisins for example. They are a little thicker than French crepes.

They sure were tasty, and I have to admit they beat having burritos for breakfast.