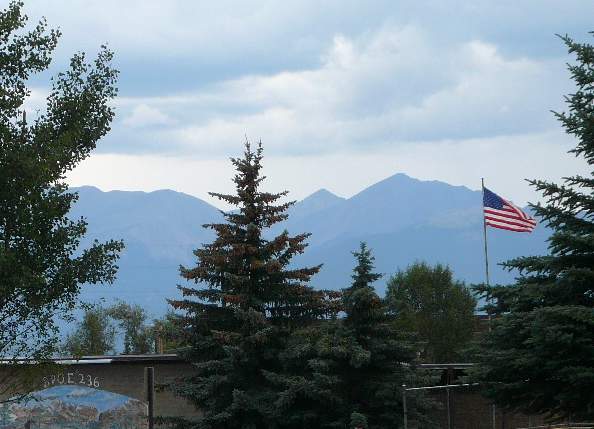 This sign was suggestive of a few things. First, the residents here are proud to live in this town surrounded by forests and (more distantly) mountains. Second, being at such a high elevation, they are more oxygen-deprived than most of the rest of the nation.

But belying the fresh white paint on the sign was a portion that—thanks to vandals—once displayed a ‘D’ instead of an ‘L.’ As it turns out, “Deadville” could have been an appropriate name of this town. That was the conclusion I drew after Nick and I went there during its busiest week of the year.

How many miles did Nick want me to pace him? The last 50 miles! While that may sound pretty crazy, keep in mind that seemed rather trivial compared to running the whole 100.

We arrived there two days before the race to 1) help acclimate to the altitude and 2) arrive early enough to find an available campsite. It turned out the latter was no problem as there was plenty of free, legal camping off dirt roads in the middle of pine forests. It looked like a great place to spend the night. Even the fattest, blood-thirstiest mosquitoes agreed.

So did the rain gods. Unfortunately, when I pitched my tent, I made the bonehead mistake of not spending the 60 seconds to throw on the rainfly (as it was sunny at the time). When we returned to the campsite some hours later, the inside of the tent had numerous puddles thanks to some slow-passing torrential downpours. It took me about 15 minutes to dry it out with my Pack Towl ™.

It’s just as well, as we had lots of time with nothing to do. Why? Back to the Deadville theme.

This town has 3000 residents and a charming, Wild West-like Main Street, but even on Leadville’s busiest week of the year (when the Leadville 100 occurs), one would confuse it with a Hollywood ghost town. For example, during mid-afternoon on Friday, Nick and I were looking for a place to have a sit-down lunch, and to our dismay, two restaurants we were considering (including an Italian restaurant and another one we heard served pasta) displayed signs reading “CLOSED.”

We went to the town’s one-screen movie theatre housed in what looked like a portable trailer used at dilapidated elementary schools, only to be dismayed that, it, too was closed until later in the night. My pre-race tradition of watching a movie the day before went unfulfilled.

At one point—back at our campground inside Nick’s XTerra to take shelter from the mosquitoes—I openly mused what people did in this town. I guess the answer should have been obvious—they run!

And so at 2:50 a.m. on race day, we woke up to congregate on Main Street with the other runners and support crew. At 4:00 a.m. the runners commenced their long journey while fellow Fort Colliners Tom and Ginger graciously gave me a ride to the first checkpoints to offer logistical and moral support.

Nick came through Checkpoint #1 immediately muttering “not good,” referring to his back which was injured just two weeks ago. By Checkpoint #2—or Mile 24—he proclaimed his race done. He was clearly in pain despite chucking down Moltrin earlier on and by this junction, the race had already become a death march for him.

So I never did have to pace Nick the last 50 miles of the race. As we headed home, I reflected upon how the race would also become a death march at some point during the next 24 hours for the vast majority of the remaining runners. It’s just another reason this town may well be called Deadville.