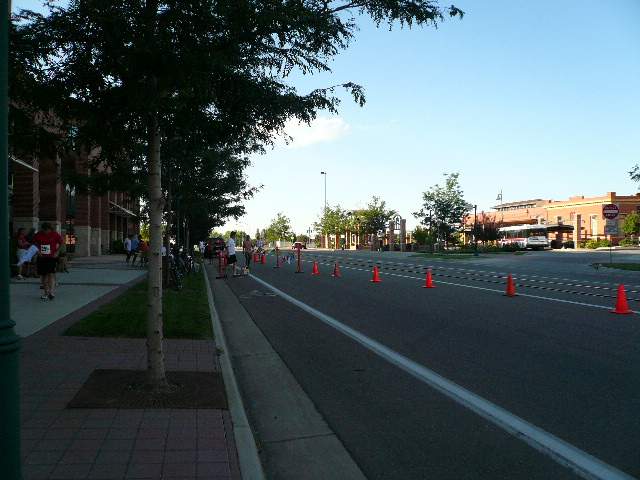 “The last time I did a mile race was in 10th grade P.E.,” I remarked to my friend Jonathan as we stood around at the start of the annual Mountain Avenue Mile race in downtown Fort Collins.

Considering that was 17 years ago—and my time was a pedestrian 6:19—setting a personal record today was as much of a foregone conclusion as Lindsay Lohan landing herself in jail for drunk driving. More on my mind was if I could finish under six minutes, and by how much.

A couple of days ago I even went out to one of my favorite dirt-packed roads near home to do some half-mile Intervals That Were Simply Not Encouraging. This included a first interval of 3:07 in which I was panting worse than a dog that had just chased a rabbit in 90-degree heat, and a second interval in which I paced myself better, but still could only muster a 2:59.

I even told my buddy Nick about this, to which he replied,

Based on your two intervals, I predict you will run 5:35. Adrenaline and competition are good for at least 25 seconds, if not more.

As it turned out, I could hardly be happier with my race.

At the start in the Men’s Open wave, I lined up behind a bunch of shirtless guys who were clearly going to be fast. So did Jonathan—whose pre-race strategy was to “run right behind some fast people and get a nice draft.”

Personally, my strategy was to stay on an inside lane (to minimize the distance by a few steps) and keep a steady, controlled pace throughout the entire distance. Before the race started, I counted to myself, “1-2-3 4-5-6” at a 190 step/minute tempo—a mental chant I’d repeated over and over during the first three-quarter mile.

After the race commenced I still wasn’t breathing that hard after the first quarter. Nor the second.

In the third quarter, other people in front of me seemed to be fading. Unfortunately, despite my mental step-counting, it seems like I also slowed down a bit too.

The last quarter, on the other hand, was positively exciting.

Jonathan was a few steps behind me the entire race, but picked it up after the final corner. I could hear his characteristic gait right behind me, and since I knew it would be hard to outkick him (since he has one of the most explosive sprints of anyone I know), I started my own sprint a tad earlier than I otherwise might have, with about 150 meters to go.

Visions of Steve Prefontaine in the Munich Olympics flashed into my mind. At that race, “Pre” knew that he could not out-kick Lasse Viren so he started a desperate, courageous sprint 400 meters out. Pre almost had him until Viren turned on the afterburners in the final corner.

A similar fate occurred to me at the Mountain Avenue Mile. I held Jonathan off until about 25 meters to go when he got a few steps on me. The instant he came around me and was about two steps ahead, I virtually threw in the towel. He simply wanted it more than I did and finished in 5:10.

But I could not be more pleased with my time: 5:12! Actually, I was really surprised. I never imagined being able to finish in the low fives, and I always assumed that doing so would feel more like a leg-trashing, lung-burning suffer-fest.

Maybe I could have run even harder. Next time Jonathan and I will attempt to finish in under five minutes. In any case, it is good to know that my running has come quite a way since 10th grade phys. ed.