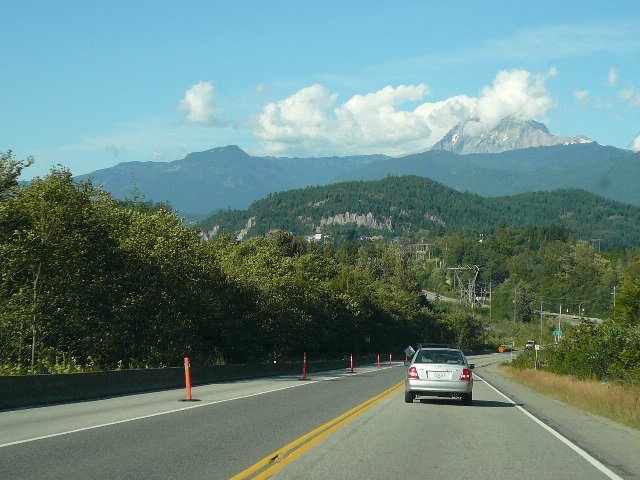 “It’s a little out of the way,” I told Lisa not long after we crossed the U.S.-Canadian border, “but it’s such a beautiful place to stay. Plus, it’s a great place to run!”

We therefore traveled along Highway 99, over the Lions Gate Bridge in Vancouver, and along the rugged coastline of British Columbia to the self-proclaimed “Recreation Capital of Canada.” The drive along this winding strip of pavement was just as gorgeous as I had remembered, with ocean bluffs to the left and mountains taller than clouds not far ahead. It did seem more dangerous, however! One reason for this was that this time I was in a front-wheel-drive hybrid sedan instead of nimble Italian sports car, and that there was road construction all over the place in preparation for the 2010 Winter Olympic Games.

We made it through these parts alive, however, and later that afternoon we found a hotel with a clean room (and even an Italian restaurant downstairs) to stay in. More significantly, the hotel receptionist was able to recommend an excellent five mile trail run on the nearby Four Lakes Trail.

As the name implies, this trail goes by four lakes (including Alice Lake, the largest). The forest it goes through is so dense that it often felt like we were running through a tall tunnel of trees, with the majority of sunlight being filtered out on this almost-completely clear day. I love the mystery and romance of such dimly lit nature areas, so it should come as no surprise that I really liked Squamish.

“After being in places like this, vacationing in a big city just doesn’t do it for me anymore,” remarked Lisa at one point. Agreed!