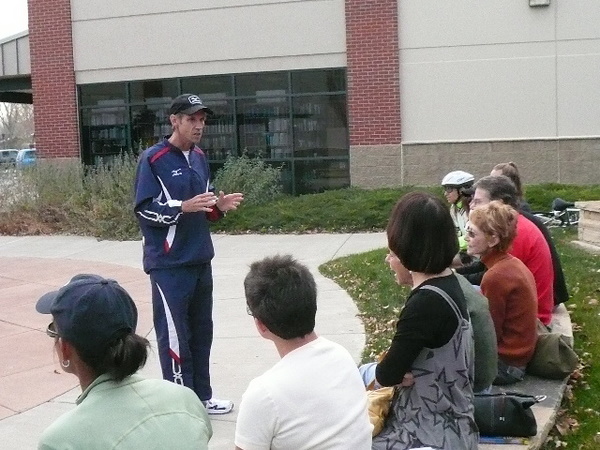 Jeff Galloway, the former 10,000-meter Olympian (1972) and best-selling author, came to visit Runners Roost in Fort Collins today, and it turned out his talk was very relevant to my latest posts about endurance sports, injuries and health.

“I am now on my 50th year of running,” said the 62-year-old marathon guru, “and have not been injured for the last 29. Before then, I was getting injured on average once every three weeks.”

“The walking resets the body’s fatigue-o-meter back to zero,” he purported. In addition, for most people, interspersing one mile of running with one minute of walking only causes them to lose about 15-20 seconds, since during the minute of walking they are still making forward progress.

He claimed that his method has been so effective that a friend of his even won a 48-hour endurance race with it (by running two minutes and walking one), even though with about 10 hours left in the race, he was 11 miles behind the leader!

Hmmm, I think it is something I will try for my next 100-mile run attempt.

Other advice from his talk:

This was the second time I’ve been at one of his talks, and both times I was very impressed with him. Apparently, he also wrote a book entitled Running Until You're 100. I think I’m going to have to read it sometime.

It was a great talk and to top it off, I won a prize—a training diary conceived by Jeff. He even autographed it for me. Cool.