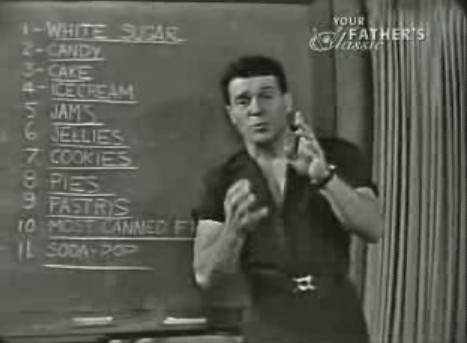 Ok, I removed the post about “unhealthy role models” since I decided I want my website to continue to be about celebrating athletic achievements instead of denigrating them. In that vein, I thought I’d post something about a “healthy role model” instead. One that comes to mind is Jack LaLanne, still alive at 93 years young.

LaLanne is known as the Godfather of Fitness, and deservedly so. He is probably most famous not just for his health and fitness TV shows of the 50s and 60s, but also these incredible human feats:

Reputedly, even at 93 years of age, he still works out two hours each morning doing a combination of weights and pool workouts.

But what inspires me the most was his all-round attention to other aspects of healthy living. Some examples of this are below.

Diet: he would often say, “if man made it, don’t eat it.” And even back in 1953, he was telling us how we should minimize intake of “white sugar, candy, cake, ice cream, jams, jellies, cookies, pies, pastys [sic], most canned fruits, and soda pop”—good advice that, naturally, holds true today. Here’s a classic video dubbed “Sugarholics.”

Here’s a tribute to LaLanne’s 10-Point Self Improvement Plan (unfortunately Comedy Central took down the video of LaLanne’s actual plan):

Finally, here are some words of advice from Lalanne from just two months ago, on Labor Day 2007 at Venice Beach—more than 50 years after the above videos (when he was ~40). As you can see, he still looks great and sounds strong at 93 years of age. Amazing.

Jack really was ahead of his time, and it would not surprise me if he lives past 100!

My grandmother (Noni) lived to be 98. Up until she was 97 she worked out 1 1/2 hours per day, 7 days a week, lived by herself (unassisted), cooked and cleaned herself. Thirty minutes was working out to Jack LaLanne! She could touch her palms on the floor with legs unbent. She took what Jack said to heart. Jack and Noni are my roll-models for longevity.