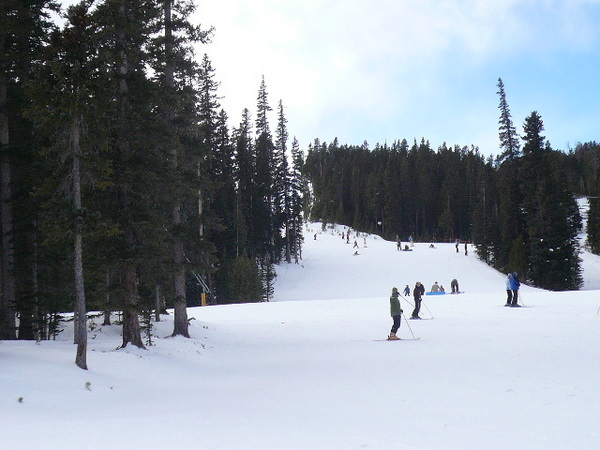 Hooray for snow! Well, we’ve actually had below-normal levels of it this winter in Fort Collins (just three days of it this season so far), but the mountains have had some healthy doses of it. So today (Friday), I headed out to Eldora Mountain Park to do mostly downhill skiing. I chose Eldora because it is reasonably close and their pre-season lift ticket rates (which ended Friday) were only $45 for an adult.

I will actually be writing an article for Fort Collins Now about Eldora sometime in the next few weeks, so I’ll keep this brief. The snow was only ok-ish (very packed) when I started, but fresh powder started falling at around 12:30 p.m. By 3:30 p.m., about two inches of fresh powder had accumulated, and as a result I was skiing a tad better. Within five hours, I got in 21 runs and for the most part, Did Not Fall Too Much. My K2 Shuskan Randonnée skis and Scarpa Denali boots (both of which I got off of eBay last winter) felt great—even while I did a little cross-country skiing around the parking lot or tried to ascend.

Now only if my technique was better. While going downhill, my turning skills leave a lot to be desired and I relied way too much on plowing (wedging) to keep my speed under control. As a result of having barely adequate speed control, I had a few extreme adrenaline rushes despite sticking with only the green runs this time. But it was fun.