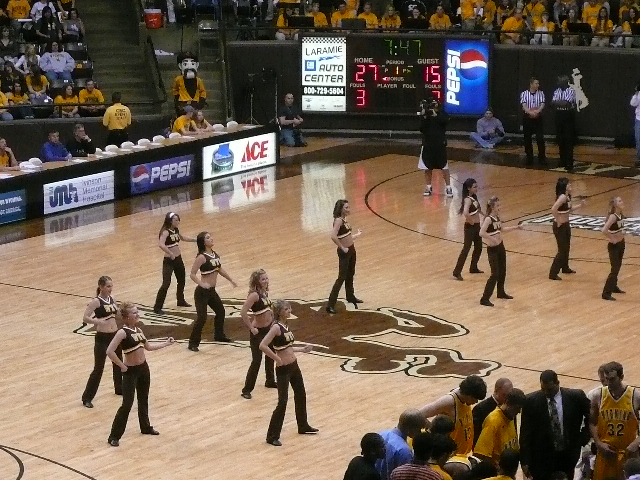 A minute in the game was remaining, when everyone—ourselves included—started wiggling the fingers on our outstretched hands as if we were performing some sort of voodoo ritual. Wyoming’s guard, um, what’s-his-name, was shooting free throws. It doesn’t matter that his name escapes me right now as I write this two weeks later. The free throws went in and Wyoming won the game, proving that our voodoo worked!

You may wonder what I was doing at a basketball game. It may surprise you, then, that there was a time in my life I was actually a big basketball fan. Actually, my entire family was. During the 1980s, we could be found sitting in front of the tube watching the Los Angeles Lakers, or outside shooting airballs, during basketball season. The Lakers were Really Good, so it’s good that we were perpetually rooting for them instead of the Boston Celtics or the Detroit Pistons. Or the Chicago Bulls.

I also had a odd habit of listening to the Sacramento Kings game on AM radio while “trying” to sleep. I say “odd” because who listens to sporting events on the radio anymore when you can watch it on TV or the Internet?

Anyhow, I digress. Nick, Dana, Alistair and I had gone up to Laramie to meet up with Nick’s friends Ari and Phoebe from New York City and watch the University of Wyoming take on Boulder in basketball. Ari’s cousin, you see, is on the roster of the Cowboys’ (the U. of W’s official mascot), and even got us free tickets. So not only did we get to visit with some New Yorkers, but we got to watch the basketball in person (my very first time) at no cost!

Never mind that if it wasn’t for Ari and his cousin, I would have been rooting for Boulder. Hey, allegiances change! For example, in 2008—which I will be rooting for everything Boston, particularly because I will be running in its marathon, finally!—I will be rooting for the Celtics. And the Patriots (football). Although in baseball, I don’t need to root for Boston since they (the Red Sox) already won. Heh.

Thanks to Ari for the tickets and Nick for driving.