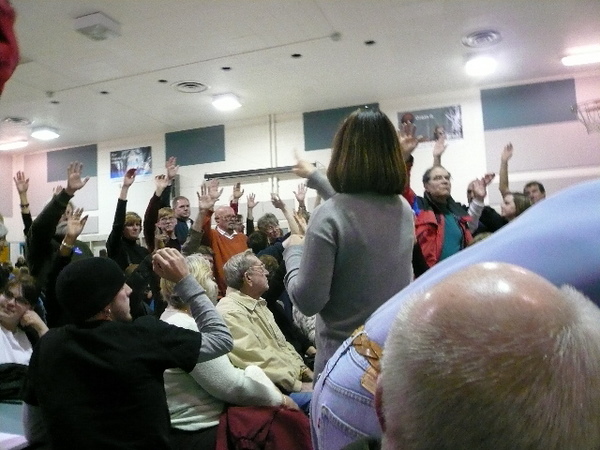 Prior to this election year, I have never participated in a caucus because I had formerly always lived in a primary-only state. But it didn’t require prior experience to guess that Democratic turnout this year was unusually high. Indeed, all of us in the gymnasium of Tavelli High School—where my caucus along with several other precincts’ was held—were packed in like sardines.

As the precinct was just a few miles away, I hopped on my bike, got to Tavelli about 30 minutes early, and was surprised to see that most seats were already taken. I managed to squeeze in at one of the cafeteria tables so I wouldn’t have to stand, and spent the next half-hour socializing.

After it was all said and done, about two hours had elapsed. “It sure would have been easier if we had just had a primary,” another caucus-goer had cheerfully remarked.

It certainly would have been less involved, but there are plenty of advantages of having a caucus instead. First of all, if someone is unsure how to vote, the caucus-goers can have a discussion to help the person make up his mind.

Second, you get to meet your neighbors. I had the pleasure of meeting a friendly couple named Marge and Lloyd, who had many good stories to tell plus had some interesting connections. For example, one of their relatives founded a company that was the leader in ladder design for firetrucks. Their nephew quit his job one day and traveled around the world and wrote an award-winning book entitled Cool Creatures, Hot Planet.

They even suggested trying to hook me up with their 32-year-old daughter, but I just smiled and demurred.

All in all, it was a fun night, despite all the Hillary Clinton backers smuggling in 18″ X 24″ signs—against party rules—proclaiming their support for her.

Who won my precinct? That would be Obama by a 53 to 26 vote. He will be getting seven delegates vs. Clinton’s three at the county convention.