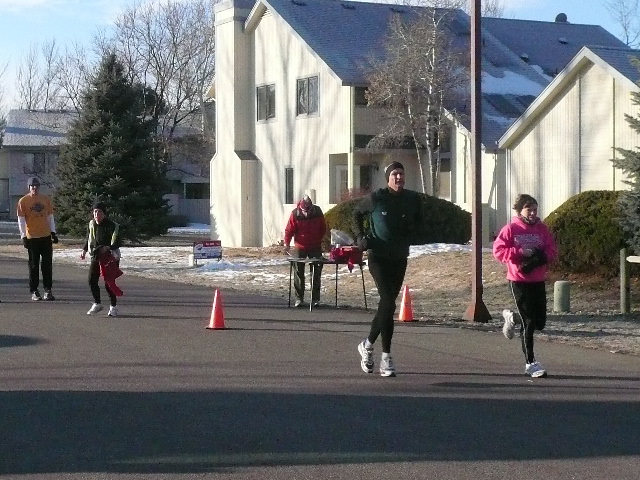 By 8:00 am the morning was already brightly lit, but it seemed like several of us at the Warren Park 5k had dim hopes for running a good race today.

“I have no confidence about running on this winter day,” proclaimed Alex, who is often the Male Hare (fastest guy) in the Fort Collins Running Club‘s Tortoise & Hare Series, of which this race was a part of.

I, on the other hand, was optimistic. After all, I resumed training semi-seriously again about two weeks ago. Yes, two weeks! In fact, I was so optimistic that I did not even bother to do a warm-up jog before the race and instead elected to socialize. And strip down to a long-sleeved T-shirt and pair of running shorts, even though every single one of the 22 other participants wore long pants, tights, and jackets. By the way I was dressed you might have thought this was a race being held in mid-spring or mid-fall were it not for the fleece headband, fleece socks, and Gore-Tex gloves I was wearing to keep my extremities warm.

I started running second-to-last—almost one minute before Alex—as per the race series’ “computer-calculated handicapped start” tradition, with a visitor from Mt. Shasta City (California) named Jeff being my “rabbit.” My plan was to start out conservatively and pick up the pace in the second half, and finish in 20 minutes and some odd seconds, which I would have considered a respectable time for myself at this point in the season.

It was not to be. I started out conservatively all right, but the brisk air was searing my lungs and I could not breath deeply nor rapidly. My legs did not feel like they had much spring in them and although my leg turnover was pretty good, my stride length was shorter than normal and it seemed like I was actually landing harder with the thicker, fleece socks.

Jeff—who admitted that he was “running scared” when he saw me not too far behind him at the turnaround point—got further ahead of me in the second half, and unfortunately I did not feel well enough to pick up the pace until about 100 meters from the finish line.

Final time: 21:23. Hmmm, that was the first time in two years that I’ve exceeded 21 minutes. Ah, well. As the weather warms up and I train a little more, I’ll be faster once again.

After the race we headed out to Gibs’ Bagels for breakfast, and I had the pleasure of talking with who had run an amazing 149 miles (without stopping) over New Year’s at the Across the Years run in Arizona. We talked about the possibility of me crewing for her in… guess where? The Badwater 135 this year! Stay tuned!