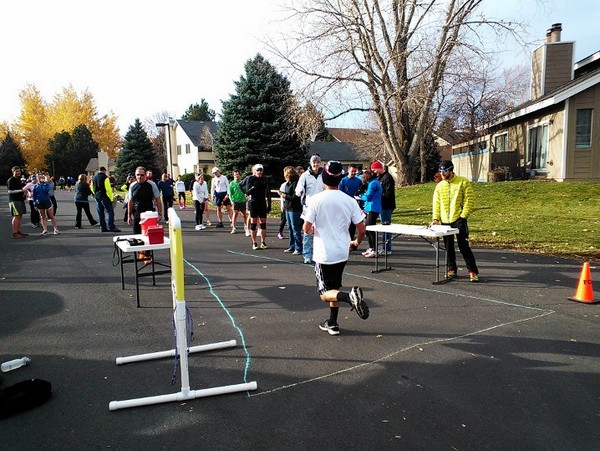 Running a total of 10 miles in the last 7 weeks since the marathon double is probably not the optimal way to train for any sort of race—even a meager 5K. But I’ve been in this boat before. So I didn’t even think twice about slipping on my running shoes and heading over to the start at Warren Park. Or even think once about putting on my pace-tracking Garmin Forerunner 110, apparently, as I absent-mindedly left it in its recharging clip in the office at home when getting all my gear together for the race.

Oh well. This was just a Tortoise & Hare race, a staggered-start race for (primarily) members of the Fort Collins Running Club where the slowest runners start first and the fastest ones begin last. It’s not like I was going to win even if I had hypothetically run the best race of my life, had Michelle Ferrari as my doctor, and was in on Lance Armstrong’s doping conspiracy. The eventual winners would beat their predicted times by over three minutes, and I simply was not going to be able to do that without seriously abusing my role as the Fort Collins Running Club’s programmer of its prediction algorithm.

So this was more of a race to test my fitness level of this time of year than to put some points on the board. The weather, much like last year, was near-perfect for running so I didn’t even bother to wear a windbreaker over my singlet while waiting at the start. My only concession to the high 40-ish (Fahrenheit) temperatures was wearing some gloves.

It turns out we couldn’t have asked for better weather conditions. I ran the first mile conservatively and hence felt relatively good breathing hard in the second half, including a nice little downhill through a neighborhood after the turnaround point. Not having my Garmin on I can’t say for sure how consistently I was running, but by going off the internal stopwatch I believe I ran some even splits.

When it was all said and done, I felt satisfied with my effort. Indeed, while the 20:25 I finished in was a tad slower than three of the six other times I have run this race, I was 14 seconds faster than last year despite probably having better overall fitness due to all the Furnace Creek 508 training I did in 2011. Take that, aging.

I probably should run more than 10 miles between now and the next Tortoise and Hare race, though.

Take THAT, aging! Felix!!!! Maybe if you wore some walmart clothes over your minimalist attire you'd shave a few more seconds off... ↩ Reply

I guess my Dollar Store gloves were not high class enough for you. :) ↩ Reply

Hey, we have the same run training philosophy! ↩ Reply

You are better about doing butt exercises than I am for run training, though. :) ↩ Reply

Looks like you've been staying active and kicking butt as always, my friend :) So nice to stumble upon your blog randomly this evening while I was looking for mountain bike rides around the Bay Area! Earl and I live down near Stanford and I've been doing a lot of riding around here (even started bike commuting to school). Hugs to you :)