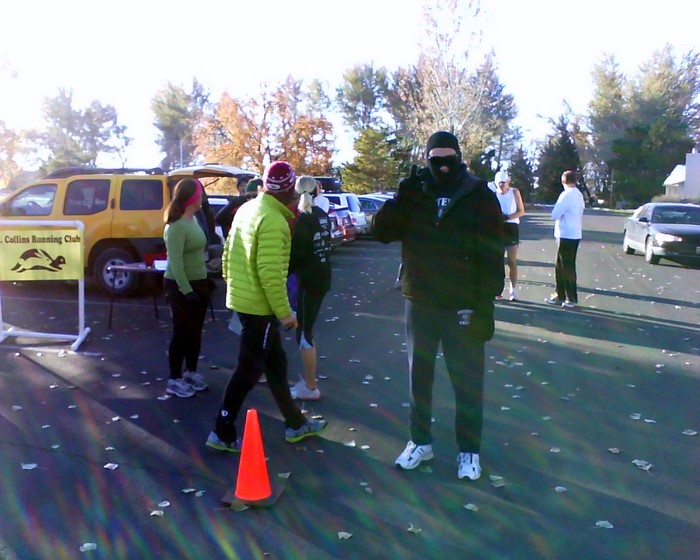 Belying the remnants of snow and ice on the ground—and Tim’s “bank robber” face mask—was a beautiful day for running: 35 degree temperatures, still air and nary a cloud in the sky. Everyone’s bodies were potentially even more rested than they otherwise might have been due to last night’s change to daylight savings time.

A total of 42 runners showed up today, which was a decent turnout considering that yesterday was the Heart Center of the Rockies Half Marathon, 10k and 5k. Afterward we headed over to Rocky Mountain Bagels to enjoy donut-shaped bread and friendly banter. A good time was had by all.

Some of us even received ribbons!

I forgot my Garmin Forerunner at home, so I did this race with no GPS feedback and strictly by feel. In the past when I had been running a lot, this would not have been a problem, but running only, oh, 25 miles total in the last six months does not lend oneself to being the most in tune with his body.

I was intent on not starting out too fast, and on this count I succeeded. I started to pick up the pace after Mile 1, shortly before seeing Kelly running the other way. There was no way I was going to catch her—and ultimately, I did not—but I wanted to try.

Indeed, I thought I kept the pressure on pretty well, even passing my buddy Tim shortly after the halfway point. For someone who had barely run after the Colorado Marathon, I was feeling fantastic. When I sprinted across the finish line (nipping Amy at the very last second), I felt that I may have crossed in one of my better times for this race.

In fact, I finished in one of my more average times in recent memory for the 5k distance: 20:39, or 6:36/mile. Meh. Oh well, at least I didn’t feel like a suffocating zombie like at the end of the last Tortoise & Hare Race.