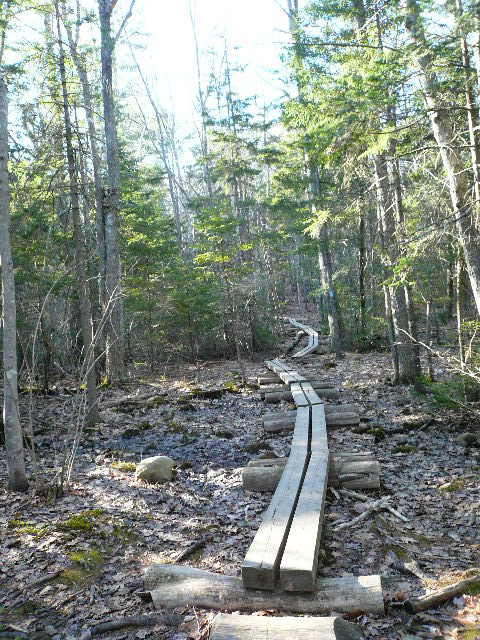 The idea was pretty simple. I’d drive over to Camden Hills State Park, pay my $3, and drive to the top of Mt. Battie to peer at the Atlantic over the Maine Coast. Then, if there was still time, I’d drive up to Bar Harbor and Acadia National Park, where the views were supposed to be just as splendid.

There turned out to be one problem, though, when I got there. The park was closed.

At least to motor vehicles. Locked gates blocked the vehicular passage up the motor roads to both the top and the campgrounds. What were not forbidden were hikers. On the other hand, I highly doubted that doing a steep hike was the best thing to do just a few days before the Boston Marathon.

It turned out the prohibition of motor vehicles was a good thing, as the noise from motorcycles and automobiles would have diminished the experience of hiking through the woods just ten or so yards away from the road. As it was, here in the dense New England forests was completely peaceful, with the only sounds being the ruffling of some leaves and water dripping down the hillsides.

At the top, the views! There was a lookout tower which one could ascend via inside stairs, but actually, the best spot for looking out was on the east side of the mountain, just about 100 feet from the tower. I hung out here for a good 20 minutes, admiring the vistas of Camden below, Cadillac Mountain in Bar Harbor 40 miles north, and private islands in the Atlantic to the east.

It was a delightful way to end a great day of exploring Maine. Never mind that I never made it up to Bar Harbor, and that my legs were no longer quite so fresh after the hike. The journey up here was renewing; the vistas both surreal and magical.