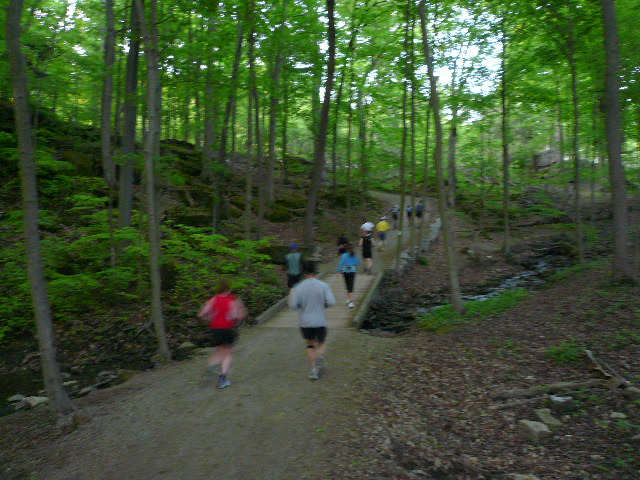 Twenty-four hours after finishing the Sulphur Springs 100, I am happy to report I successfully completed all 100 miles on foot, even if barely. Due to the numerous hills, nearly freezing to death at one point, having problems seeing where I was going at night even with a headlamp, foot blisters, utter fatigue, and getting lost with just 5.5 miles to go (and hence actually “running” 102.5 miles, total), I finished with just 20 minutes to spare in second-to-the-last place of all finishers… but of course I was just happy to finish. This was definitely the hardest one-day event I’ve ever done; a true suffer-fest.

Due to a time crunch, instead of posting a full report, here are some excerpts from an e-mail I wrote.

The next time I decide to go that distance, I think I’ll ride my bike—or drive a car.

Anyhow, I finished the race! Though barely, with just 20 minutes to spare. That definitely was the hardest thing I’ve ever done; I’ve never suffered so much, particularly in the last 35 miles.

The first half actually went really well… despite all the hills, I finished the first 50 miles in 10:35—and my legs were still feeling remarkably fresh. This was no doubt due to walking every few minutes, since that’s when I’d encounter another uphill.

But on Lap #6 (out of 8 ) I did the dumbest thing, which was to not put on more clothes after I passed my car at the beginning of the lap. The first half of that lap I was fine, but after darkness set in, I nearly froze to death and my body was expending a ton of energy just trying to stay warm. I was breathing hard just standing in place.

After Lap #6, I went to the car to the car and spent about 20 minutes warming up, and also took a nap for an additional 20 minutes.

Then I ran wearing a thick wool coat for the next lap, but by that point darkness set in and I had problems seeing where I was going even with a headlamp. So I decided to walk almost all of Lap #7. In hindsight, I think the constant walking (as opposed to alternating jogging and walking like I did in the first half) contributed to fatigue, due to not giving the walking muscles a rest. Not to mention, I was a whole lot slower.

In truth, running at night while I was cold, sleepy, exhausted, and couldn’t really see plain sucked.

By Lap #8, there was daylight again, but by that time my normally indestructible feet were badly blistered and it was still hard to run. Nevertheless I forced myself to run, even though at some points I was suffering so badly I was moaning with virtually every step.

Then, with just 5.5 miles to go… I got lost!!! I missed a turn, and was in a near-panic since I had absolutely no idea where I was in the trail system, even after finding a trail map. If I wasn’t so tired I probably would have been completely distraught. So I backtracked and fortunately ran into the only person behind me. If I ran into him just three minutes later, I would have missed him completely (as he would have turned off at the turn I missed—it turns out the arrow indicating the turn was spun 150 degrees off, perhaps by an errant mountain biker), and likely would have gotten disqualified even if I did find my way back onto the course due to missing the time limit.

Getting off course meant I did about 2.5 extra miles and lost about 55 minutes. But I couldn’t have cared less about my total time; I just was happy to finish.

I would conclude this e-mail by saying “stop me if I ever think talk about running 100 miles again,” but let me tell you that after this race, I have absolutely no desire to try something like this ever again.

Incredible achievement - congratulations!!! Totally looking forward to your write up. I can only imagine how tough it must have been if you don't want to face it again. ↩Reply

FELIX-I am so proud of you! What an incredible inspiration you are. I admire your courage, your determination and your great attitude! Thanks for sharing this amazing experience. And thanks for the honesty......no 100 milers for me! :) ↩Reply

Congratulations to your great accomplishments. I have to say you have a high level of pain threshold. My knee and ankle hurts just reading it. Great run! ↩Reply