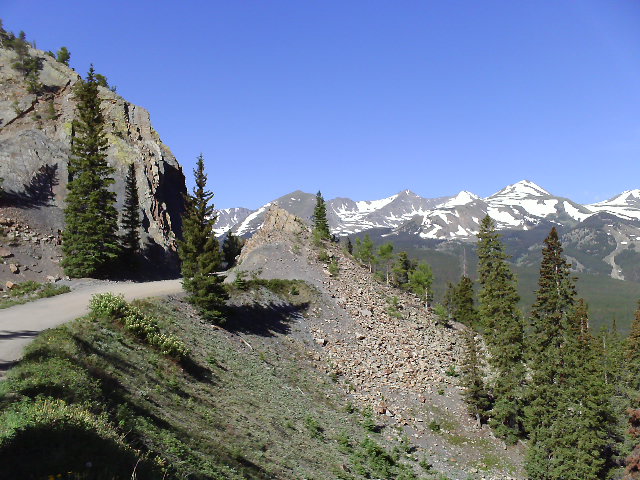 Hi, this is Felix Wong calling at 10:09 a.m. on Monday, June 30th from Salida, CO. I’m actually staying in a hotel tonight unlike last night when I camped at a campground near beautiful Dillon Lake. I just jumped in the shower with all of my clothes on trying to get them clean and I guess I’ll sleeping in the nude tonight.

Boreas Pass was very gradual with great scenery, great views and even though it topped off at 11,500 feet it was a very pleasant climb. The last climb was much steeper but had great views of the 14ers, at least when coming down to the Salida. In between seemed to be mostly downhill. My progress was only impeded by an extremely fierce headwind in the afternoon. But otherwise it was great day.

I think other than the two passes, the highlight of today was passing by South Park. Previously, I thought South Park was a fictional town in Colorado so I was very happy to see it is a real region. One of my favorite TV shows is South Park. In fact, I resolved that after this race is over and I am back home in CO, I would do a South Park marathon. By which I don’t mean running 26.2 miles but instead I will be laying on my couch with my feet propped up on a some pillows and watching this season’s episodes and maybe last season’s also. Right now that is sounding really good to me. I’ll talk to you later.
(recorder time: 2008-06-30 23:11:54 EST)