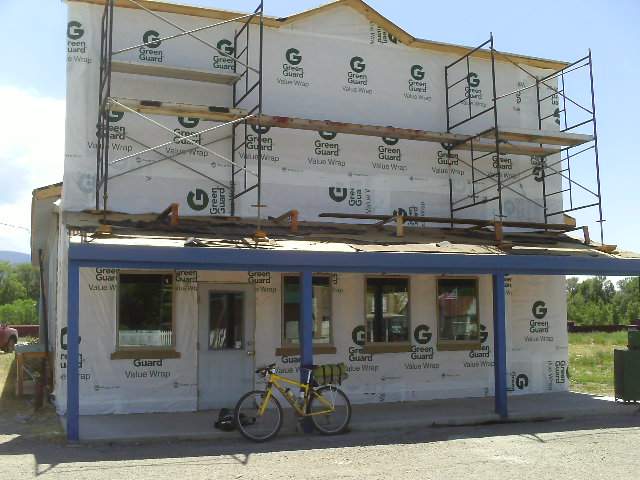 Hi, this is Felix Wong calling on the 4th of July. Its Friday, 10:20 a.m. I’m couple of miles from the New Mexico Border.

Every holiday it seems like I have some sort of vehicular problem and this is no exception. I had my second crisis. Last night my cyclometer died. I think it has something to do with the sensor; I’m not sure if it is the sensor itself or the sensor battery. It doesn’t really matter because the sensor battery is a very rare 12 volt AA-sized battery. One that I’m not going to be able to find anywhere.

Right now I’m heading off to Chama. I’m going to look for a cyclometer. What I have been doing for the last 12 hours or so, I was going from campsite to campsite asking people in RVs if they have a cyclometer on their bicycles. Had no luck there. Then one of the locals told me that he sees cyclists biking up Highway 17 a lot. So I actually did wait at the corner of Highway 17 and Forest Service Road 117, which is the road that I’m suppose to go on next to New Mexico. I waited for about 3 hours; no cyclists.

So I’m heading down to Chama. [can’t make out next 2 sentences] To see if there is any cyclist with a cycometer. Cyclometer is [essential for navigation]. Even with a functional one, I get 1-4 miles lost each day. The next supply point for me is El Rito which is about 100 miles away. If I get lost in the forest, it’s a bad, life and death situation. I need to take care of this problem and hopefully I’ll find something in Chama.

Felix Wong Headed back to the Trail

Hi, this is Felix Wong calling at 12:11 from the town of Chama, NM. Its about 50 miles off route. I’m calling on the 4th of July. I am in much better spirits.

When I got to Chama, I encountered a cyclist and I ask her if she knew any cyclists in town with a cyclometer I could buy off him or her. She led me into a little office that is under construction. A construction worker just upgraded to a GPS on his bike and he had a Cat Eye Cyclometer at home in his garage just 2 blocks away. So he went to fetch that for me and I just mounted it and it seems to work fine.

It looks like I’m going to be good to go in terms of navigation. I just have to climb back up a huge pass which I had to descend to get into Chama. That’s going to take at least 2 hours to ascend, until I’m back on route, but at least I’m going to on route and I should be heading down through New Mexico shortly.

Right now, I’m enjoying a cup of ice cream. I got rocky road which I thought was appropriate. It certainly has been a rocky road, especially the past couple of days for me. Anyhow, talk to you later. Bye.
(recorder time: 2008-07-04 13:14:40 EST)