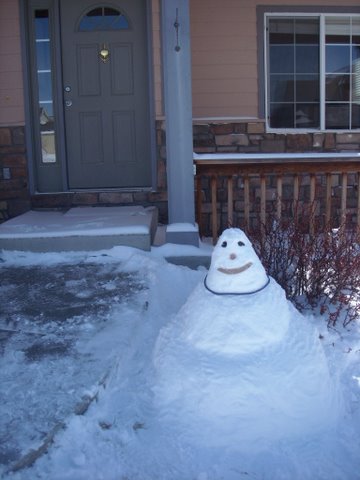 March is usually the snowiest month for Fort Collins, but this winter the weather has been drier than Oscar Wilde’s wit and much milder than Taco Bell’s inaccurately named “fire” sauce. And when it came to predicting the production of white fluffy stuff, the weather forecasters gas us more false alarms than the fire department did at my elementary school.

It was with great excitement—and almost relief—to practically everyone in town when one evening the skies produced more than a dozen snowflakes. In fact, over night about six inches of snow accumulated on my driveway and even more in the southern part of Fort Collins.

What to do about this rare (for 2009) event, then? I decided to do what the Poudre School District and many businesses did: declare it a Snow Day!

First item of business was clearing off the snow from the driveway. I even purchased a new snow shovel the night before for this task, given an excuse to do so when the wooden handle separated from the five-year-old one the previous owner of my home kindly left for me when I moved in a few years ago. I got one of the plastic orange shovels (which friends would later make fun of as “looking like a kid’s snow shovel”) that doubled as “a pusher and a scoop in one super UNBREAKABLE snow removal tool,” as proclaimed by the product’s label.

It turns out that the shovel might as well been a kid’s snow shovel, as I promptly broke the shovel’s wooden pole within two minutes of use by just lifting a few pounds of snow. Actually, the snow shovel the five-year-old kid across the street was using seemed to be stronger.

“So much for the six year guarantee,” I thought to myself. (Postscript: the manufacturer is sending me a new pole by UPS free of charge, so I guess at least they did stand behind their guarantee.)

After that, I was forced to repair my old snow shovel to resume the snow clearing. This took longer than usual due to the depth, wetness and consequent weight of the snow, but I did not mind—it was a Snow Day after all!

Fifteen to twenty minutes later, the driveway and sidewalk was clear, so it was time to celebrate. By making a snowman!

Using my hands and a bucket (for use as a scoop), I made one that was about three-feet high in another 15-20 minutes, cutting a tortilla to make his smile, the end of a sausage for his nose, and some black paper cut-outs for his eyes. I was pretty proud of my handiwork until the next day I was cruising around Tori’s neighborhood, and it seemed like every third house had a snowman in front of it that was twice as tall as mine. It was like her neighborhood was having some sort of competition.

The final activity on my agenda was to do some cross-country skiing (with my randonée skis) on the Hearthfire recreation trail around the corner from my house. Not a single soul had stepped onto it since the snow storm commenced, so I got to lay some fresh tracks of my own.

I skied a couple miles. For skiing, it would have been better if we had a few more inches of snow, but this is not a complaint—after all, this was the most snow we had gotten ALL YEAR!

Felix, you got this post up just in time for today's dump. Hope you get your replacement shovel soon! ↩ Reply

I remember when we first moved back to town in 2006 and we had a huge blizzard and we went everywhere and couldn't find a snow shovel in Fort Collins. I think people here are all from Florida. ↩ Reply