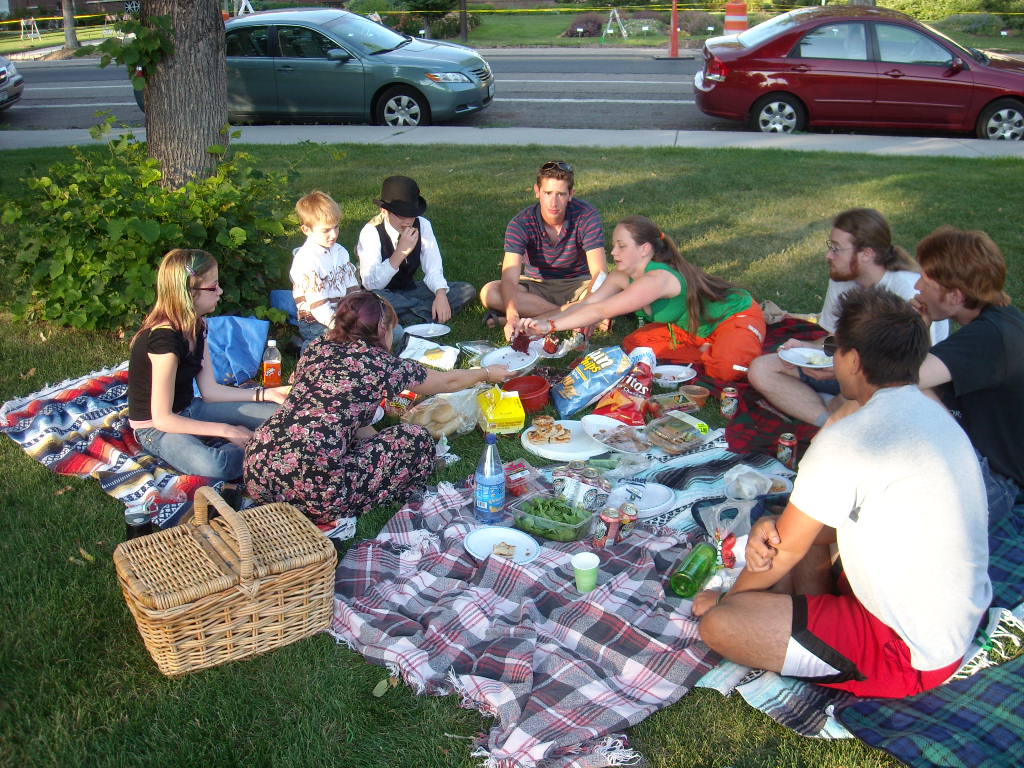 “There’s Shakespeare in the Park tonight,” I declared. “And therefore while talking with thee I shall refer to thy, thou, and thine in every sentence today. Ok fare-ye-well.”

A Midsummer Night’s Dream, then, was the reason—or rather, the excuse—that Cheyenne, Cody, Dan, Davy, Jesse, Jon, Justin, Ryan, Tanya and I were having a picnic at the colorful CSU Flower Gardens. We purchased tickets an hour before the show before spreading out on the lawn, sitting on blankets and eating homemade niceties like Tanya’s focaccia, fresh fruits like strawberries from the Sunflower Market, and rich desserts like the chocolate raspberry cake that Ryan brought in. It was an appropriately warm midsummer evening with not a drop of rain, although we did get sprayed by oscillating sprinklers right after we declared our bellies were full and it was time to go inside and watch the show.

Just one problem—the show was oversold and all the seats were taken. Doh! A bummer, but at least the director was kind enough to give us a full refund and offer us comp tickets for a future production of the same play.

We did have the entire night free though so it was off to Plan B. A movie! After being on the phone trying to figure out quite unsuccessfully what was showing and when, we ultimately headed off to the Cinema Saver for a look-see.

It turned out that any movie there we’d be interested in seeing wouldn’t be showing for at least another hour-and-a-half, so we resorted to Plan C which was to pile into our cars again and head over to the drive-in and park in front of the screen showing Transformers, Revenge of the Fallen.

Unfortunately, it seemed like every citizen of Fort Collins plus their extended family and out-of-town friends had the same plan, and soon we were in a mile-long line of cars going 1.2 miles per hour to the drive-in. After half-an-hour of this Tanya and I resorted to texting each other to pass time even though we were physically only separated by about 12 feet in our separate cars. But then, with only about 20 more car-lengths to the ticket booth, a drive-in employee on foot started to inform everyone that Screen #1 showing Ice Age 3 and Transformers was sold out.

We then defaulted to Plan D which was to park in the lot for Screen #2 and watch a juvenile wizard with a funny British accent who can fly, wave his hands and I-don’t-know-what-else-he-does. Yes, Harry Potter.

We actually got in for this. Hooray, success! Well, sort of. We had to park behind an entire row of SUVs and what might as well been military tanks and fire engines from the size of them.

As there was no way we could see anything from behind the windshields of our cars except bumpers and taillight lenses, we got out and strategically positioned ourselves on the gravel after laying out blankets we had conveniently brought for the picnic. My picnic basket was my backrest as I laid beside Tanya and her kids. I thought I was in a half-comfortable position, but despite being behind a large gap between two 10-foot-high monster trucks with chairs on their roofs, I could only see 80% of the screen.

Turns out I wasn’t the only one. Ten minutes into the movie, Tanya remarked, “Somehow I think this is a movie I’ll have to watch again on DVD.” Meanwhile, little Davy had his head turned sideways to watch Ice Age 3 showing on Screen #1 1000 feet to our left, sans audio. At least before falling asleep.

Meanwhile, the Harry Potter movie lasted three hours. Three hours! That is a long time when you don’t know what the heck is going on. At least after Ice Age 3 finished playing, Transformers commenced on the screen we should not have been watching and I got a few glimpses of Megan Fox stripping.

So I guess you can say the night was kind of a bust. But not really. At least we had lots of yummy food at the picnic and enjoyed the company of friends while staring out (quite literally) into space. Best of all, no people had to listen to me call them thee, thy or thou or whatever. Shakespeare would have to wait another day.

August 30, 2009 Sun: We got to see A Midsummer Night’s Dream at the University Center for the Arts tonight. ‘Twas so good!