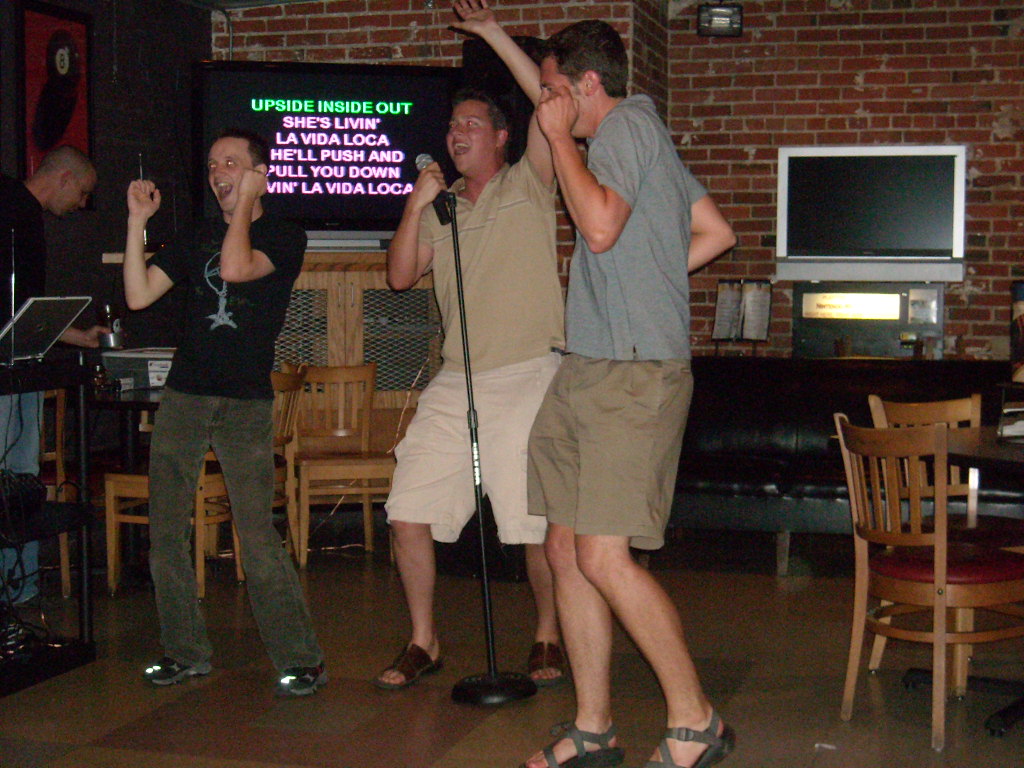 When I told Tori that she was going to miss another karaoke night due to being out of town, her reaction was closer to as if she had just won the state lottery than as if her flower garden was just destroyed by golf ball-sized hail. As it turned out, if I had a brain any larger than a golf ball, I would have gotten the heck out of Dodge myself.

At Ryan’s behest, we did karaoke at Coopersmith’s instead of the Island Grill like last time. Most of us were even a little more daring this time, with Bev singing no less than three songs, Tanya singing a 60’s classic, Jesse crooning “Eye of the Tiger” from the Rocky movie, Brad making Jon sing a girly Taylor Swift song, and Jon having Brad sing “I’m a Barbie Girl” as payback for “Tears on My Guitar.” I even decided to “challenge” myself by singing Mariah Carey (“Without You”), as opposed to picking a song by a singer with no range (Enrique Iglesias) like last time.

However, this was not the venue to do an effective rendition of a diva whose vocal span is said to be seven octaves. Never mind that for someone like myself perhaps the only appropriate venue for such a thing would be the shower, an enclosed automobile, or maybe a padded, locked room. The main problem at Coopersmith’s was that the karaoke background music was turned up loud enough not only to shake the restaurant off its foundation, but so that each singer couldn’t hear a single note he was singing.

Singing, therefore, had to be done almost entirely by the feel of his vocal cords with no audio feedback whatsoever. I could imagine the volume-happy DJ outside of work being one of those hipsters driving around a Cadillac Escalade whose suspension underwent perpetual stress tests not from the bumps in the road, but from the amount of bass being piped out of a dozen 15″ woofers. The background bits simply drowned out everyone’s voices.

Or perhaps the DJ was just trying to spare the audience from hearing any of us. Compared to the Island Grill which could have been a virtual set for American Idol, the talent pool here was shallower than a fish tank.

Despite the singing here (particularly mine) could not be described as anything but a disaster, we had a great time. The saving grace for my group of friends was that most of us sung early enough in the night (like 9:00 p.m.) that there weren’t too many other patrons in the bar to witness, boo, or leave. Towards the end the night, the DJ got us on stage to dance to “YMCA,” which really didn’t require any singing, just bouncing around like kids at a dance who suddenly realized their chaperones had departed for the night. We also played pool and—in between shouting into each other’s ears so we could hear each other above the boom of the karaoke sound system—had as many laughs as a drunkard after his tenth beer (even though none of us had even close to that many).

But in the future I think I will retire from my singing career and stick to doing “safer” activities in bars (like drinking beer). And if I wouldn’t miss the company of my wonderful, supportive friends so much, I’d almost be tempted to take a page from Tori and plan to leave the state the next time Ryan comes up with the idea of doing karaoke again. The other patrons of Coopersmith’s would probably be thankful, and the DJ might no longer feel obliged to drown out everyone’s voices with mega bass.