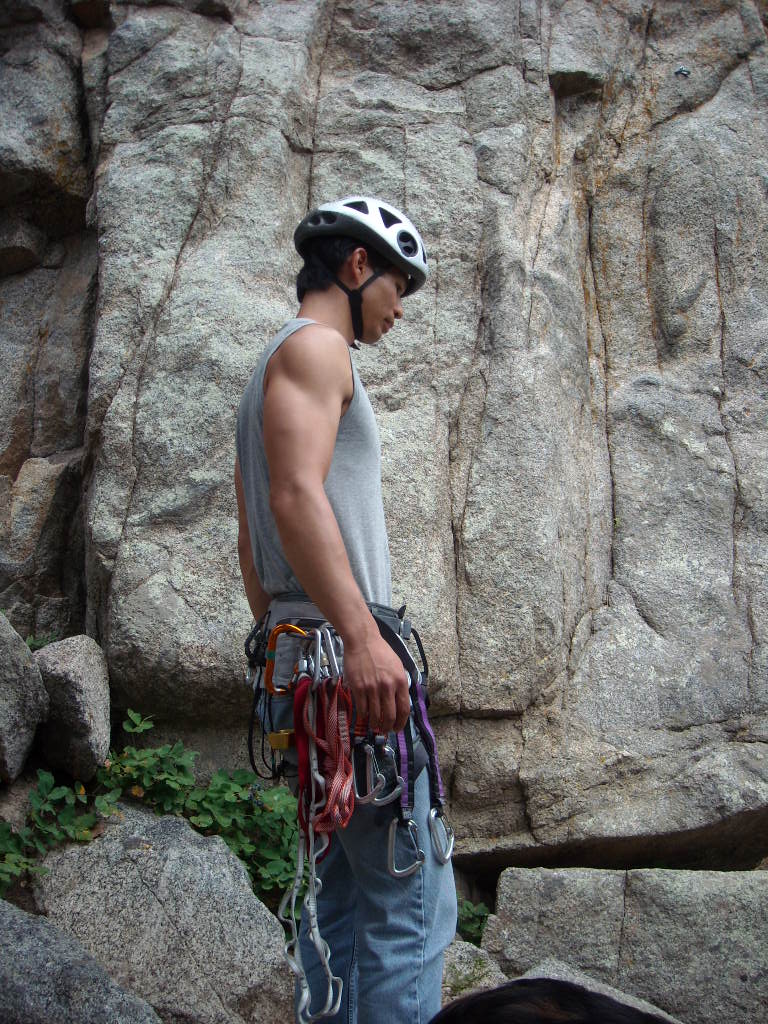 I had just returned home from a fun Friday night of indoor climbing when I received a last-minute invite from my friend Derek. It was to do some outdoor climbing in Boulder Canyon, CO. As I had only managed to get outside and climb on one other occasion earlier this year, I happily joined in despite the rather short notice.

In downtown Boulder, I met up with Anita, Derek, Isabel, her dog Hugo, and Stephanie and we carpooled to Boulder Canyon, less than 10 miles away. Ultimately, due to storms we had time for a single climb: Dementia (5.10a) on Happy Hour Crag. It’s probably just as well; after this 90-foot climb, I might as well have just ascended El Capitan as far as my body was concerned.

I lead this sport climb taking up a dozen or so quick draws, which ended up being just enough. Near the bottom of the climb I had to do a tricep-busting mantle; a little further up were some good cracks but no bolts to clip into. Here I wish I had trad gear to use as additional protection as the distance between bolts (and hence the potential distance to fall) was far.

Higher was a nearly smooth face where decent holds were as abundant as pianos in a hardware store. I spent at least 10-15 minutes in this section alone and Derek would later tell me that he was probably more nervous than I was watching me do this sketchy section, especially after I took a short, controlled fall.

Finally, I made it past the crux (although I had to resort once or twice to holding on to the quickdraws I had just put in—that is cheating) only to encounter yet another run-out section with about 10 feet between bolts. Technically it wasn’t as hard as the section I just did, but my arms now felt like they had been nuked in a microwave oven. So even though the moves were probably only 5.8 level, it felt more difficult especially with the amount of exposure between bolts.

But when I reached the chains at the top and anchored in, I was euphoric. It took over half-an-hour and was at my limit both physically and mentally a few times, but I managed to stay composed during the entire climb and not once thought about giving up.

Derek and Anita scampered up on toprope, and then we headed back down to Boulder for another Happy Hour. But this one entailed drinking beer instead of climbing rock. I never knew beer could taste so much better after doing just one single-pitch climb.