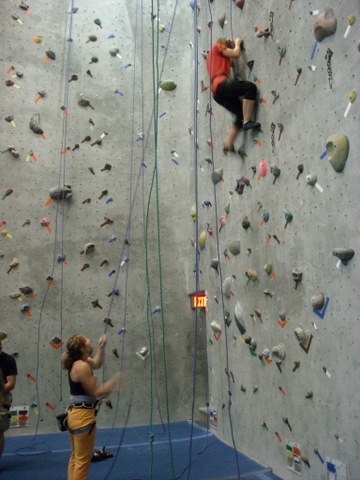 Most people spend Friday night in the following ways: having a nice dinner, downing a beer at a bar or club, driving to the movie theatre or staying home and watching television. Or so I imagine. It’s just that my friends and I have never been accused of being “normal,” which probably explains why on the last workday of the week we can usually be found hanging 40 feet above the ground with white chalk on our hands and, sometimes, other body parts.

I can be found indoor climbing most often with my gal-pals Ryan and Tanya but sometimes Bev, Christy, Jesse, Jon, Renee and Tori join us along with a variety of people Ryan brings in (the climbing gym should give her some sort of award as their #1 promoter). We usually go to Inner Strength in Fort Collins due to half-price Friday fees. Below are climbing photos I took inside that gym this year.

Most of the time—at least when we aren’t standing around and socializing or goofing off in ways that make sugar-addicted teenagers seem square—we are doing straightforward toproping, but Ryan, Tanya and I have also been lead climbing as well. Some interesting variations have included climbing with no hand holds, using no foot holds, and “rainbowing” (a term I think my Bay Area friend Alyssa made up to mean “using holds of any color”). We also keep talking about doing “naked climbing” but I’m not exactly sure how that is going to work without getting permanently expelled from the gym. 🙂

It may be a somewhat off-the-wall Friday night activity but there aren’t many other things I’d rather be doing than rock climbing with my dearest friends. Well, that and going out to dinner with them afterward. Even abnormal people need to eat.