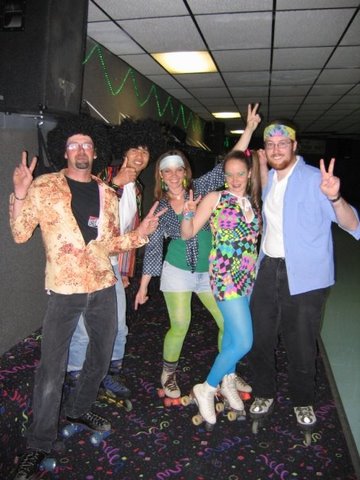 One thing I absolutely adore about my two fun-loving gal-pals Ryan and Tanya—besides that they are both super cool, smart chicks—is that they aren’t exactly adverse to making complete and utter fools of themselves. Not that they ever do, of course, just that they aren’t afraid to—a quality of confidence and self-assurance I find endearing. Let’s have a Passion Party? “Sure!” Shall we go to the CSU Drag Show? “I’m there.” What about having naked climbing nights? “I think that sounds great!” (We actually haven’t done that yet.)

So it shouldn’t exactly be an eyebrow-raiser that we have been up to more mischief, this time in a roller skating rink. Never mind that I haven’t skated since the Rollerblading craze went out of fashion in the 90s as quickly as bell-bottoms did in the 70s. Adult Skate Nights were at the Rollerland Skate Center in Fort Collins every Wednesday night until the end of May, and one could find us there every week rolling and spinning to the beat of hip hop, 80s classics, the occasional Whitney Houston love song, and even a country song or two about booze and exes and being in low places.

Of course, with part of the group being Ryan and Tanya, we couldn’t just merely skate around in circles. That alone could be enjoyable, but certainly not attaining the full potential of “fun.”

For example, there was Tanya and her culinary talents. No matter that bringing food inside the facility was possibly (if not explicitly) frowned upon; one day (with just a tiny bit of coaxing from moi) she smuggled brought in a fabulous cake she baked the night before. There was no special occasion; just Tanya trying to get us drunk with all the anisette she dumped in it.

Then there was Ryan. She had to point out one day that technically, Adult Skate Nights were also 70s Skate Nights. Never mind that most (well, all) of the other skaters were teeny boppers, college kids and chic 30- and 40-somethings wearing thoroughly 21st century garb straight out of Gap or The Banana Republic, or that the music played was more from the 80s or 90s than from the decade of Nixon and crappy cars. This 70s theme was to be embraced, so one day Ryan came decked out in an outfit of every single color combination possible and thoughtfully brought vision-impairing button-up shirts for Jesse and I. Tanya, in addition, brought some afros.

Besides turning us into super-stylin’ 70s peeps, our wardrobes provided another benefit—I would have NO PROBLEM locating any of my friends on the roller skating floor. Neither would any of the other skaters. This was a good thing since my skating skills would never be confused with Michelle Kwans’, and being any less visible could have meant more collisions especially whenever I attempted to skate backwards.

After that day and upon inspection of our photos, one of Ryan’s friends commented, “Funny, I don’t remember wearing ANYTHING like that in the 70s.” Hmmmm! But Ryan easily deflected that criticism by replying, “I think you missed out, then! Come and join us to relive your childhood!”

We tried again a couple weeks later with Tanya going to the farthest extremes, this time by not wearing an afro but by dyeing her hair. She actually warned us in advance of this—something about how she was having problems holding “a strand of hair, dye, aluminum foil and a mirror to see the back of her head at the same time”—and for a whole day or so I tried to guess in my mind what color she was trying to dye her hair with.

Somehow I nearly convinced myself it was going to be blue and was prepared to call her the Cookie Monster, but when she waltzed in, the cutie was sporting purple hair. I could probably be rightfully accused of developing something of a “purple crush” that day.

Meanwhile, I came in wearing a rainbow-y shirt I hastily picked up at a thrift store earlier along with a headband. Unfortunately, I could not find one of those thick terry cotton sweatbands that the Chris Everts and John McEnroe types might have been seen wearing, and had to settle for a thinner, smoother headband marketed for soccer.

This, apparently, caused a little confusion as days afterwards a buddy looked at pictures and wondered, “Felix, was it hippie night? What’s the deal with the bandana?” I had to calmly explain that, no, I wasn’t a hippie, and no, that was not a bandana I was wearing.

Clothing critiques aside, skate nights were most definitely a blast (and even good cross-training!) and dare I say we did not make complete and utter fools of ourselves. Most of the time, anyhow. It remains to be seen if our naked climbing nights will proceed quite as successfully.