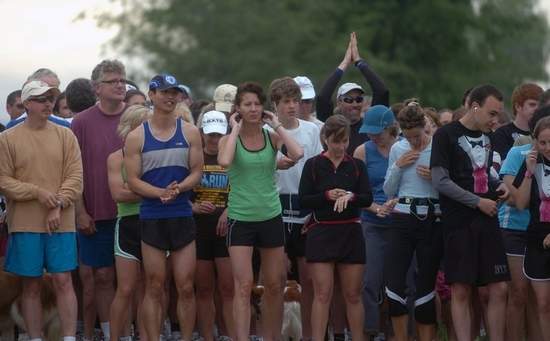 I was driving over to the Sunflower Market the day before Memorial Day when I passed by a sign next to Houska Automotive proclaiming “Houska 5K tomorrow.” At first I thought it was advertising for a 5,000-mile oil change, but when I went home and looked it up, I discovered it was actually Mr. Houska’s and Fort Collins’ “answer to the Bolder Boulder.”

In other words, it was a run. As it also was a fundraiser for a good cause—namely the Poudre Valley Hospital Foundation and bone marrow recipients—I thought, why not? Besides, I figured the concurrent Bolder Boulder would siphon off many of the fastest runners with promises of prize money. Perhaps I could even achieve a pretty good placing.

Some of those hopes went out the window when I arrived at the starting line and noticed there still were many hundreds of people here, and the course was partly a cross-country course. Besides, my training had been meager this year, and since last month’s Oklahoma City Memorial Marathon, I had only run 30 miles.

Yet, with near-ideal temperatures (low 60s with cloud cover) and fresh legs, I managed to retain the optimism of a venture capitalist. And so I lined up in the front row…

After the gun went off, I stayed on the heels of the two front runners, Brad Pace and Dennis (husband of my friend Alene). During the first half-mile I felt the pace was relaxed enough that I could have run off the front for a little bit, but 1) I didn’t really know where I was going and 2) I knew I wouldn’t be able to hold off either of them for long.

Sure enough, after Mile 1 I couldn’t hang on. A quarter-mile after that, another runner caught me and took over the third position.

Just past the halfway point, another guy caught me and until Mile 2.3, we were swapping fourth place a couple times. At that point, a petite, blond gal which I guessed to be in college appeared from nowhere, passing both me and the guy I was in the midst of a battle with—all while seemingly not even breathing!

That gave the other guy another shot of motivation and he started to pull away as well, while I remained content keeping the two of them in my sight. This set up a rather exciting, frenzied finish.

The final eight-of-a-mile was off-road—a finishing straight adjacent to some railroad tracks. From here one could clearly see the finishing banner, and it was here that I knew I had to make my move if I were to have any chance for 4th or 5th. So I commenced an all-out sprint—a bit earlier than I normally would do so, but I had a bit of ground to make up.

Across the street were a few friends cheering wildly. “Go Felix!” I could clearly hear them yell several times at the top of their lungs. Unfortunately, the guy in front of me also heard this, and after looking back a couple times to see that I was quickly closing the gap, decided to make a break for it as well. The blond also picked up the pace.

Ultimately, I ran both out of breath and time, and virtually threw in the towel with 10 meters to go. Outrun and outsprinted, I felt dejected that I had just blown a good opportunity for a Top 5 finish in this race of ~500, but also felt satisfied that this was the fastest I’ve run a 5k in a while (19:08).

After the race, it also gave plenty of fodder for friends to tease me with.

“Now you are getting chicked by chicks you don’t know,” remarked Alyssa, who has a habit of chicking me in other things. Or as another friend joked, “You’re still young. You will learn to trip these whipper snappers if they get close to you in the future.”

As it turned out, the “whipper snapper” was not from college, but was only a sophomore in high school. Nuts.

Hmmm, I’m getting beat by high school sophomores now, great. Maybe I should have spent the morning getting an oil change instead. Or run in Bolder Boulder. At least, that race is supposed to be crazy.