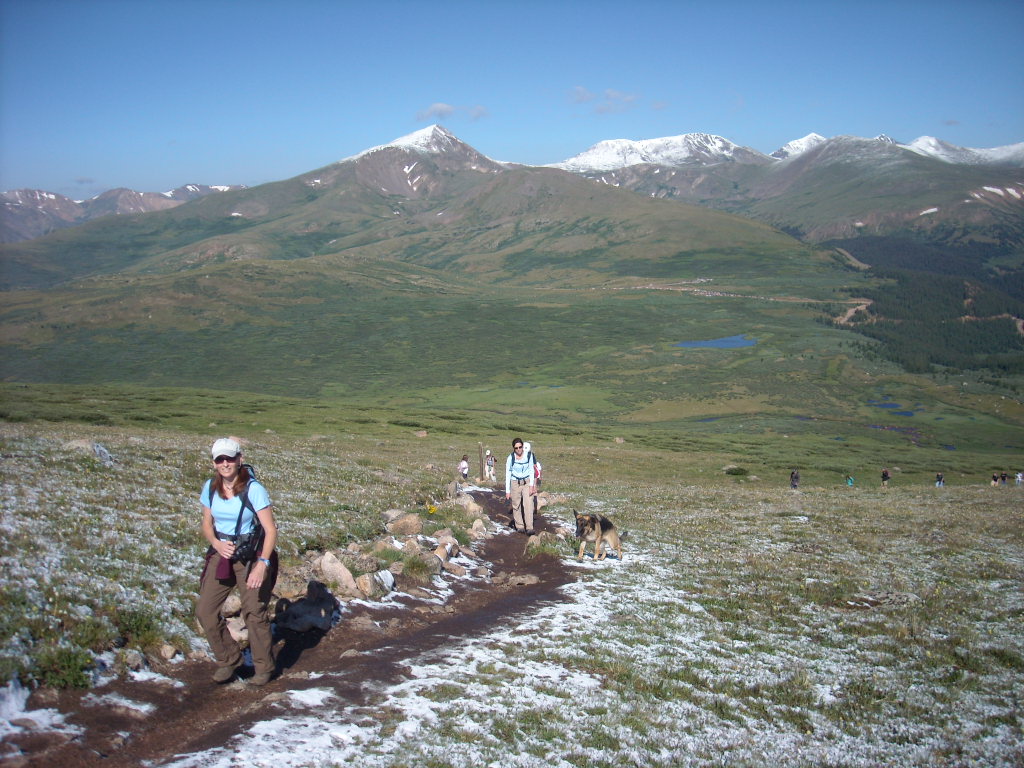 Around this time of year, the topic of fourteeners frequently pops up in random conversation among Coloradoans. After all, Colorado has 54 peaks above 14,000 feet and August usually means ideal hiking weather. So it wasn’t exactly a coincidence that Julie, Lisa, Tori and I were all eager to bag one of these summits.

Being Colorado transplants, none of us have ever hiked a fourteener in the Centennial State (I’ve previously only ran two of them as part of races) so we decided to pick an “easy” one. Mt. Bierstadt above Guanella Pass south of Georgetown fit the bill, being seven miles long with 2,850 feet of elevation gain. Despite requiring a little off-roading, the drive up Guanella Pass did not require 4×4 or monster truck ground clearance. Even a C6 Corvette made it to the trailhead parking lot without requiring a trip to Miracle Auto Body afterward.

The first half of the ascent was through swampy bush-laden land with some boardwalks over the more flood-prone areas, but was a relatively easy stroll. The second half was above the tree line and because it had just snowed last night, footing was sketchier. The gradient of the rise increased until approximating the steepness of a household stairway and the closer we got to the top, the more we had to use our hands for balance while we scrambled over boulders.

Perhaps due to its proximity to the Denver metro area (not much more than 1 hour away) and not being too much more difficult than baking cookies, there were hundreds of hikers here on this day. The trail when viewed from above often resembled a trail of ants homing in on home-baked pastries and at one point I remarked, “This is the most people I’ve ever seen on a hike before.” The same point could have also been valid about dogs.

But the panoramic views were some of the best I’ve seen in a while. Encircling us were snow-capped mountains and sawtooth-shaped peaks with a valley of trees and bushes below and scree and boulder fields above. The weather—including temperatures in the low 50s and plenty of sun—could not be much better either.

The four of us had lunch at the summit and by the time we started to amble down much of the snow previously on the trail had melted. Descending took about half the amount of time to ascend.

By the time we had arrived back in the parking lot, I started to think about doing another high-altitude trek. August wasn’t over yet and there were still 51 Colorado fourteeners that I hadn’t kicked dirt upon. Anyone game?