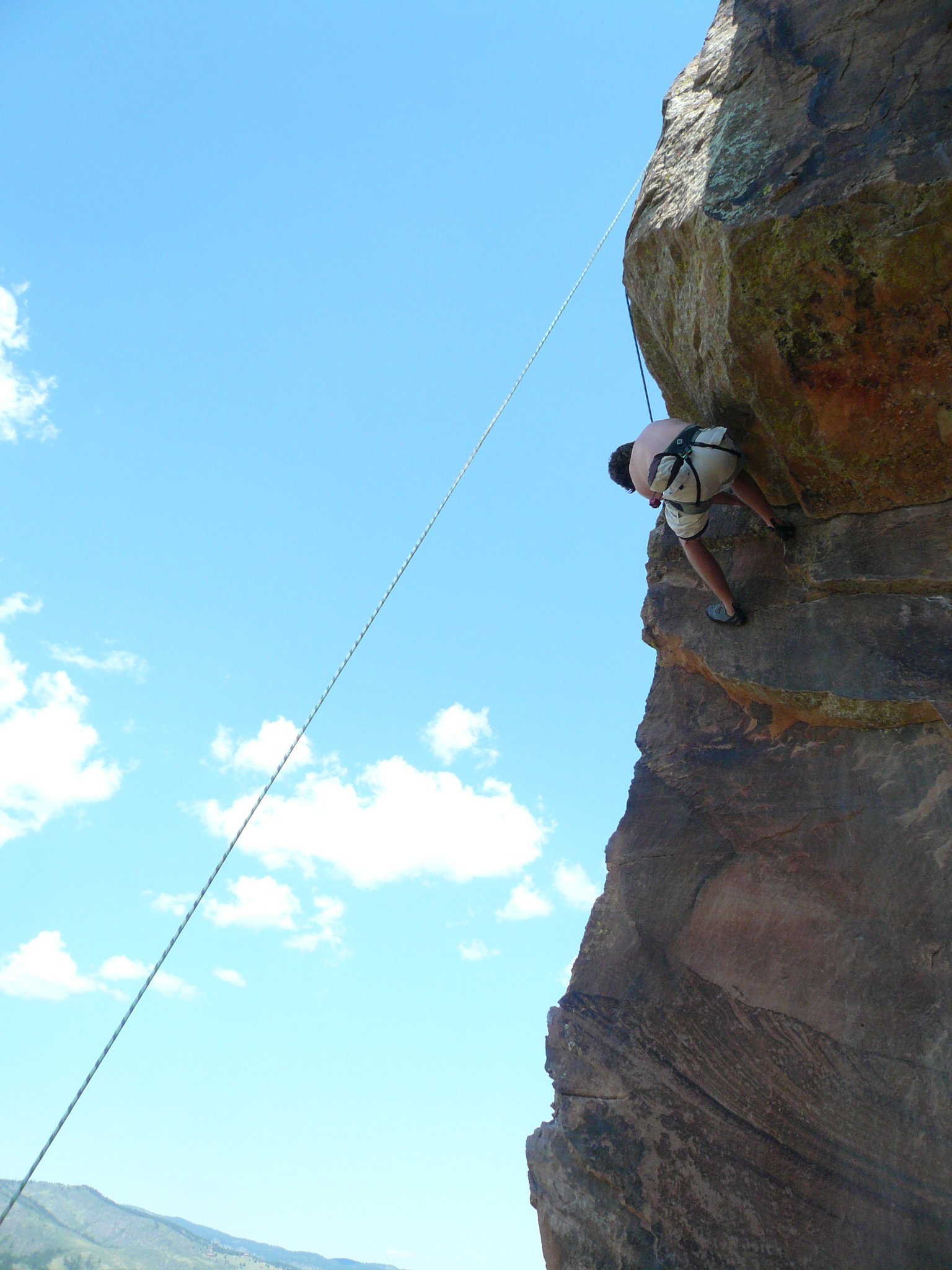 “On the east side of the Horsetooth Reservoir, there are lots of world-class bouldering,” I remember telling a friend, citing this as the stomping grounds of bouldering legends John Gill and Jim Holloway. “But unfortunately, there are almost no rock climbing routes.”

Turns out I was wrong. In fact, there were enough toproping opportunities next to the reservoir to satisfy our inner Spidermen for an entire afternoon. This was a happy “discovery” since Horsetooth is much closer to where I live in Fort Collins than any other outdoor rock climbing location I know of in Northern Colorado. In fact, after attending the Fort Collins Running Club’s annual picnic in Cottonwood Park, I was able to ride my motorcycle to the first place we climbed at—Rotary Park—in a mere five minutes.

Here I met up with Derek and Anita and, later, Rita. There was also a solo, shirtless, mustachioed quinquagenarian named Rob groping rocks around us. We tried a couple climbing routes on the Cat Eye Wall multiple times: (1) a 5.9-ish corner crack leading to a gnarly seven-foot-wide roof that required leftward traversing while underclinging, and (2) the 5.10a Cat’s Eye Face.

Derek and I successfully ascended the former but the latter defeated all of us including Rob, who opted to free climb (climbing without ropes) even after talking about how a famous boulderer recently fell to his death while doing so. That is, when Rob was not showering Rita with more attention than bees give to bright flowers in bloom, all while alluding to his wife and girlfriends.

“You meet all sorts of interesting characters around rock,” Derek and I later agreed.

Ultimately I think we preserved Rita’s (and our) sanity by relocating over to Duncan’s Ridge, a couple miles south of Rotary Park and well away from Rob. We set up a toprope using the only two bolts in place in this area, which were useful to climb Corner Climb (5.7) and its variations. Meanwhile some other climbers who set up routes to our right using hexagonal nuts and slings wrapped around boulders as anchors graciously let us jump on one of their ropes for our last climb of the day.

Roof Route (5.10) had an overhang just like those in rock gyms, and in a dehydrated state I gasped for every milligram of moisture in the non-humid air while resting or falling three or four times. I persevered, however, and eventually reached the top after calling upon every one of my mitochondria’s ATP. Derek, on the other hand, flashed the route like it was his first climb of the day.

With this climb under our belts we decided to call it a day—but not before driving down to the south end of the Horsetooth Reservoir. No, not for more climbing—to purchase ice-cold drinks at a little convenience store and to walk barefoot upon the sand of the Horsetooth Swim Beach. Here Anita, Derek and I stripped down to our undies and took a refreshing dip in the (rather cold) reservoir on this 90+ degree day. It was a fitting end to a full day of rock climbing, and I wondered if John Gill and Jim Holloway also had made jumping in the water part of their post-bouldering rituals.