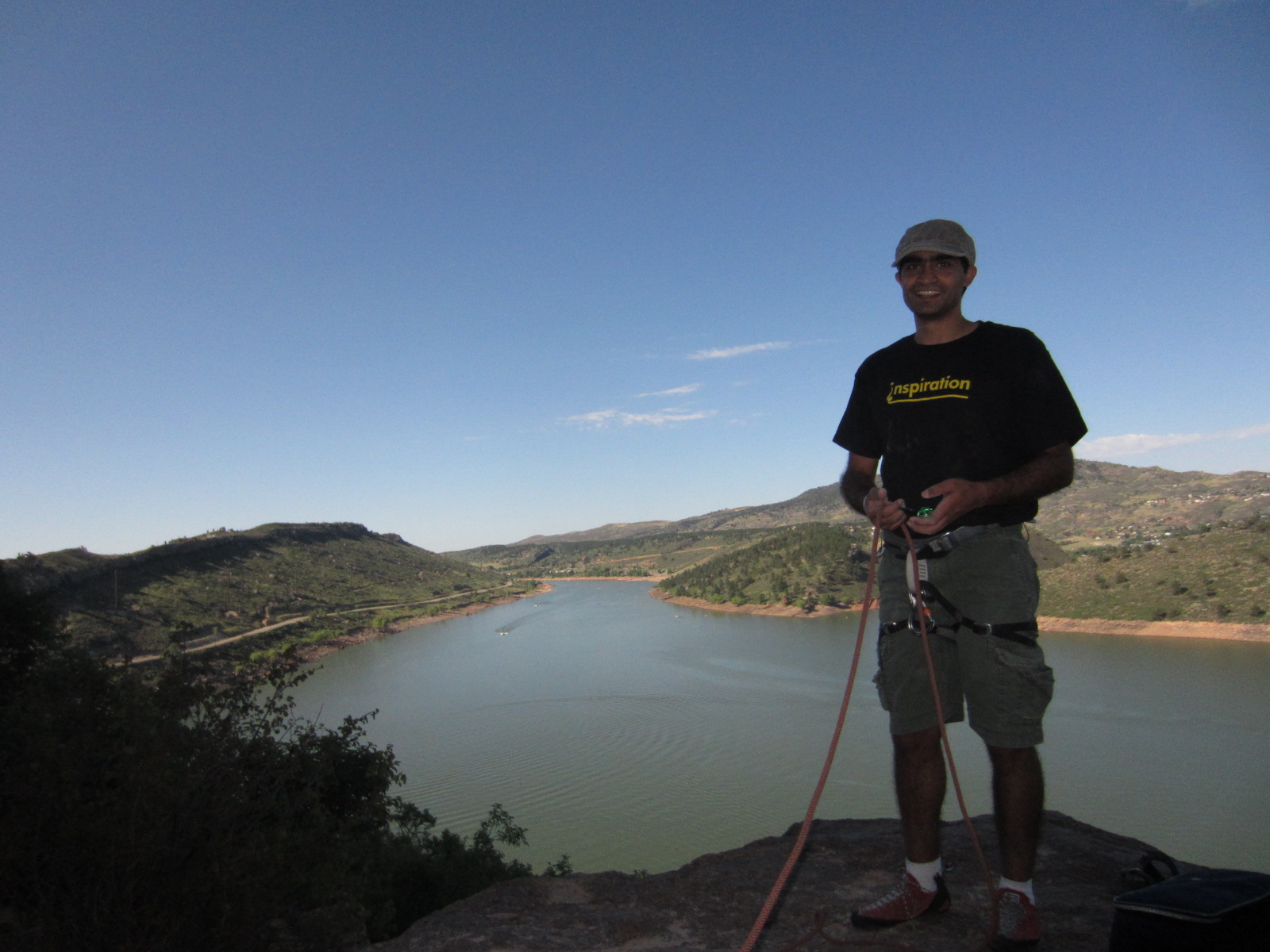 Ever since my friends Derek and Anita moved away from Fort Collins a couple years, I’ve hardly climbed outdoors. Happily, then, Raphael invited my friend Mehdi and I to climb up in the nearby Horsetooth Reservoir area the last couple Sunday mornings.

The first Sunday I had joined some folks from the Fort Collins Running Club for a 13 mile run in Redstone Canyon, and then attended a morning picnic to celebrate Connie’s birthday at the south end of the Horsetooth Reservoir. Since I already had to pay for a parking pass for the latter, I figured I might as well stop on by to say hello to Mehdi and Raphael who, I had been told the night before, would be climbing at either Duncan’s Ridge or Rotary Park. I stopped by Duncan’s Ridge and spotted Mehdi’s Toyota Highlander, but didn’t find them on the rock. Figuring they must have carpooled a few miles north over to Rotary Park, I motorcycled over there and, indeed, there they were.

I was so exhausted from the run that I opted not to climb (plus I didn’t bring my harness or shoes), but it was great to see my friends here with motorboats making waves down below in the Horsetooth Reservoir. And the following Sunday, I’d get my chance to climb—this time at Duncan’s Ridge.

We climbed a delightfully thought-provoking 5.10 climb featuring an overhang sticking out as far as, say, a typical porch roof, and finished up the morning on a relaxing slab about 10 feet to the right of the overhang. Sitting in the shade afforded by the west-facing rock, I once again enjoyed watching the motorboats down below and the gorgeous views of the deep-blue reservoir and the Horsetooth Mountains lining the other side of it.

In addition to the great company, the climbing and the views, I realized what was another reason why I enjoy coming out to this area to climb: Centennial Rd. is wonderful for riding along on a motorcycle. It is a ridge separating the reservoir from the city of Fort Collins, and features enough undulations and curves to fully engage the motorcycle rider and the bike’s tires and engine.

The Buell—which sometimes down in town can sound a little put-put-ish and almost wheezing like a little lawn mower—was here fully in its element, emitting a wonderfully deep wail from its exhaust as I went up and down through the gearbox. Its handling—particularly with the new Pirellis I just had gotten installed—was sublime, eager to respond to the body movement emitted by my hips, not too different from what Shakira would do in her music videos except that my belly button was fully covered by an armor-equipped motorcycle jacket.

Oh, and may I mention the views again? They’re superb!