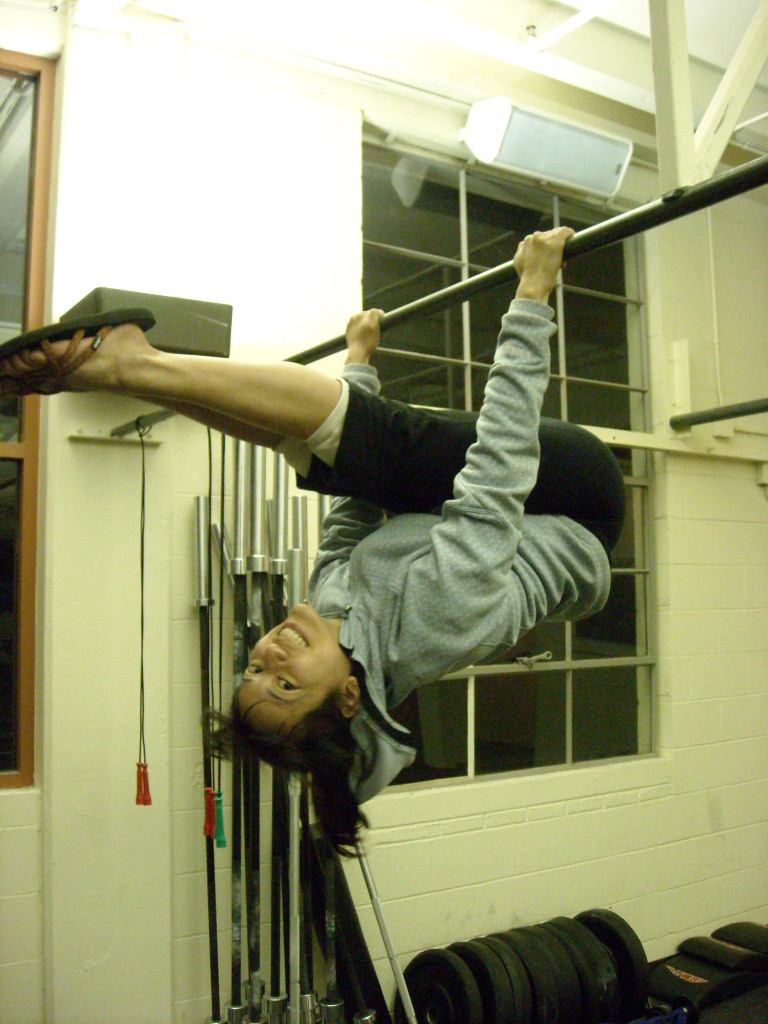 Usually I celebrate the Winter Solstice by going for a trail run or climbing a mountain, but this year I was spending it in the San Francisco Bay Area where the rain gods were dumping water all over the place. Besides, my friend Alyssa had a better idea.

“At Planet Granite San Francisco,” she wrote, “there are lots of awesome routes at that gym that appeal to a wide range of ability levels, and the views looking out onto Crissy Field and the bay are a wonderful treat. Bring your moisturizer, though—some of those juggy holds are quite rough on the hands!”

There was another good reason for climbing some walls instead of hiking up to a peak. Alyssa, it turns out, was friends with one of my sister-in-law’s best friends, Rose. I had last seen Rose four years ago at the San Francisco International Auto Show, and it was only recently that we had reconnected on Facebook. It was a few weeks ago that I “discovered” that Rose knew my perky Peninsula friend through rock climbing.

Stacey, a good friend of both Alyssa and I, carpooled with me over to the new Planet Granite in San Francisco so it would be the four of us: three gals and one guy. Not a bad ratio. 😉

But if you think that climbing with three climber chicks ranging from 4’11” to 5’4″ would be a picnic, you might be in for a surprise.

At least I sure was. I had climbed with Stacey and Alyssa many times in the past—including two days before. On Friday, it seemed like I was keeping up with both of them just fine, including a 5.11d where I fell a few times, but at least I made it to the top without going into cardiac arrest and needing bypass surgery.

It turns out that on that day, Alyssa was merely getting warmed up for today.

This is what she made us do within the first 45 minutes of being at the gym, while Rose was in the steam room and Stacey was nowhere around to save me:

At last, Stacey and Rose came around and we agreed to switch partners. Relief!

Or so I thought. Inexplicably, Stacey also decided to break poor Felix by picking a 5.11a route. Never mind that Alyssa had already made us do two 5.11s just minutes before. (“Well, you didn’t make it all the way up the 11as,” she’d later remind me.) Anyhow, since 4’11” Stacey made it to the top of that one, she gave me no slack, even booing me every time I fell (which was about a dozen times) on the climb before reaching the top about 15 minutes later.

“Ok,” I said to Stacey after she let me down, laughing. “I need to climb with Rose now.”

I looked for Rose and Alyssa, and they were (surprise surprise) on yet another 60-foot wall. Alyssa had just completed a 5.10b on it, and she managed to convince me to try it even though by this point I was skeptical every time she would exclaim, “it’s FUN!” But she explained that it didn’t really require any arm strength, just good foot placement and balance. Good thing she was actually correct because by then I had so little arm strength that a diaper-wearing three-year-old could have beat me in arm wrestling. It took me a while, but I did make it to the top without falling.

Lastly, the four of us did a truly fun V0 bouldering problem, and that was it.

Well, almost. Imagine my surprise when I exited the men’s locker room and there was Alyssa hanging off a bar doing pull-ups. But not just regular pull-ups—pull-ups with 10-lb iron plates hanging off her butt.

“Try them,” she urged. I guess by this point I was beyond brain-dead as I willingly slipped my harness back on, attached her 10-lb weights and did as many pull-ups as I could do. I did 10—or about 20 less than I can do on a normal day without 10-lb weights. Please remind me not to gain 10 pounds.

As an encore, Alyssa then did some “pike pull-ups” with her legs bent at a 45-degree angle from her torso (see photo at the top). Impressed, I attempted to do the same, but quickly decided that I enjoy doing things with my feet below me instead of over my head, thank you. Even in my own brain-dead state, I knew that it probably wasn’t the best idea to be trying to do one of these when I could barely grasp the bar with nonfunctional forearms, lest I land on my head and break my neck.

Well, maybe next Winter Solstice I’ll give it a shot—preferably before nine difficult climbs, not after. Besides, by then I’m sure Alyssa will have thought of even more ways to break me.