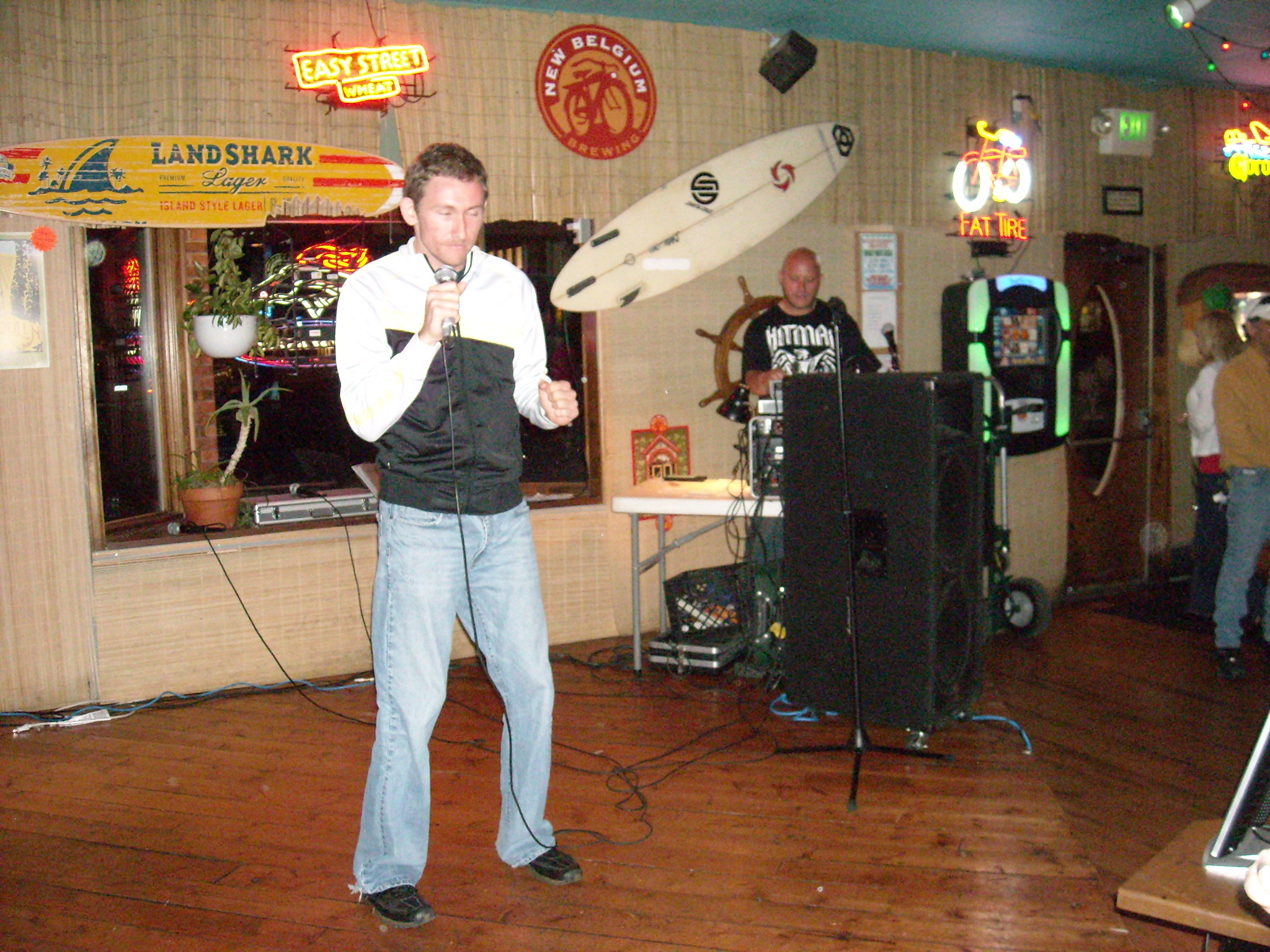 When I heard about how Dana had gone out one night in May to sing karaoke with a girlfriend, I thought I had the perfect idea on how to celebrate her upcoming birthday. It wasn’t until a little later that I learned that Dana’s girlfriend mainly wanted to go in order to get roaring drunk and that I’d encounter a bit of resistance from my friends.

Take Tori, for example. Despite desperately wanting to see Dana—something she had not been able to do since Thanksgiving dinner—she was even more desperate to get out of singing. She declared in no uncertain terms that “I’m not coming” if I were to make her sing, so ultimately I promised her I wouldn’t.

Then there was my buddy Nick, Dana’s husband. I was originally planning on organizing karaoke night for his birthday two week before Dana’s, but he managed to get out of it by not being able to find a babysitter for his son Alistair in time. He also admonished, “I have to admit I am a little put off by the karaoke element. Seriously, you do not want to hear me sing.”

I even got a little resistance from my stalwart gal-pals, Ryan and Tanya. This could have been problematic because I assured Dana and Nick that Ryan and Tanya could do the majority of the singing for our group as I had unwavering faith in their lovely voices and ability to sing. Tanya actually seemed game, but while she maintained that she’d best “sing after y’all had lots of beer,” Ryan claimed that she only croons any tunes when she is drunk. “And I don’t drink anymore, ha!” she warned.

So karaoke night could have turned out to bigger disaster than when William Hung landed on American Idol—especially after I stepped into the Island Grill Restaurant in Fort Collins and realized that “hmmm our group could be in trouble as everyone else here singing has been really good.” However, we were saved due to one thing: we got other suckers willing participants to join our group.

For example, I convinced my neighbor Tim to come. Even though he had no idea what he was going to sing despite having been warned 24 hours in advance to come prepared with list of two or three songs—ultimately he deferred to Tanya to pick a song for him—he ended up doing a decent rendition of The Beatle’s “Twist and Shout.” Our friend Stan later claimed that Tim could have been the second coming of Elvis.

Then there was Ryan. She ultimately did not do the la la la’s (guess we did not get her drunk enough), but she managed to get nearly a dozen other friends to come and cheer and exercise their voice boxes. Jon M., for example, actually started it off for our group with “Rock You Like a Hurricane,” and immediately proved that our group was not 100% comprised of talentless fools.

In fact, I’d say the only one utterly devoid of talent was I. I could not get out of singing as this was my idea in the first place, but I did come equipped with a plan. Mainly, it was to sing a song (“Hero”) by Enrique Iglesias. Why Enrique Iglesias? “He has no range,” I observed, “plus as a Panamanian named Frankin pointed out, his songs are basura [garbage] to begin with.” I figured, if my singing sounded like basura, at least I was not doing the artist a disservice.

While my song could not be over too soon, I managed to get through it before getting booed and shot and was able to safely pass over the mike to others in our group whose vocal cords were at least four times more versatile. Take Bev, Christy, Renee and Tanya.

Not only did they sing, but they did an unrehearsed yet well-choreographed dance as well: the Hokey Pokey. Don’t ask me where these Hokey Pokeyers learned their moves but they were quite excellent.

Indeed, I’d say our group as a whole did a great job and we were able to hold our heads up high as we left the Island Grill about 2.5 hours after we entered. Even Nick and the birthday girl came home with a grin on their faces and had a wonderful time, or so I heard from one of their neighbors a couple weeks later.

Ryan was also talking about organizing another karaoke night in the future and a few more of our friends have affirmed they want to come for our next one. It turned out, then, that karaoke night was a Pretty Good Idea after all, something which one did not have to consume gallons of booze to fully appreciate.

Thanks to Tim, we have some video! Here is Jon singing “Rock You Like a Hurricane.” You can also see the heads of Christy, Renée, Tanya and me bouncing around in there.