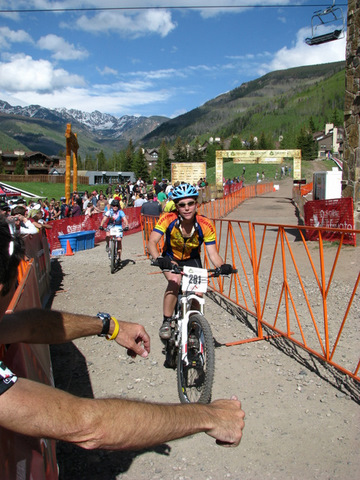 “The Teva Mountain Games take place the first week in June,” wrote Eddie. “I’ve done the 10k last year (awesome stuff) and the road bike TT the year before. I am planning on doing the 10k and MTB race this year. Also, if there are a ton of other comps going on like wall climbing, kayaking, etc.”

Cycling, running, climbing and more? My eyes lit up when I read Eddie’s e-mail much in the same way a lawyer’s does when he hears the word “lawsuit.” Plus, I had never been down in Vail—the Rocky Mountain town famous for its world-class skiing but also is a haven for almost every other individual sport in the summer. Hence, it did not take long for me to decide I would participate. I even managed to rope Lisa, Jeremiah, and Tori in coming along and sharing a lodge overnight so we could hang out in Vail the entire weekend.

Tori and I arrived before noon and while strolling through Vail Village in search of food, we encountered a GNC booth where a brawny man was bobbing up and down in a pull-up challenge, doing about 12. Now, pull-ups for most people are about as fun as digging ditches, but for yours truly, I was nearly overcome with glee when I heard that the record for the day was a mere 21.

“I can beat that,” I declared as I proceeded to empty out my pockets and take off my shoes in order to reduce weight.

The ground rules were simple: one could use any grip he wanted, but he had to clear his chin over the bar and lower himself all the way down so his elbows were straight. I used the traditional palms-facing-forward pull-up grip because that’s normally what I practice at home as it’s more useful for rock climbing than the chin-up grip.

Ultimately, I did 21 or 22 (there was a dispute between the two “judges”). I was actually disappointed in that because I usually do 30-41 at home, but a few of my pull-ups were disqualified for not lowering all the way down, plus I kept getting body-slammed by the vertical post a foot in front of me while I’d pull myself up and my body would swing. Another one of my excuses is that the clothes I was wearing (jeans, long sleeved shirt) added a few pounds. I should have done them naked.

Still, for tying the day’s record, I was awarded a big bag of protein powder called “Amplified Wheybolic Extreme 60” ($25 value) which was probably named by a 13-year-old boy who was the world’s biggest fan of the Teenage Mutant Ninja Turtles. Groovy, dude.

After Eddie, Tori and I had a convenience store-caliber lunch at a café, it was time for my main event of the day: the Mud Run. A brief warm-up lap around the course prior to the race revealed the following: 1) each lap (the race would have three) short (one kilometer) but featured two gradual climbs; 2) the terrain was half blacktop, half gravel; and 3) at the end of each lap was a mud pit with orange netting a few feet above, presumably to force racers to crawl through the pit or fall in.

About 500 runners participated, most of whom looked young enough to do this as some sort of fraternity or sorority challenge. I lined up in the front row, next to a guy wearing nothing but lyrca cycling shorts and ultra-light, lace-less trail running shoes that resembled night slippers.

When the race begun, many runners were doing an all-out sprint. Fighting for position, this got me running a bit faster than I would have liked, and already by the second hill (a 200-meter slog up a gradual, gravel incline with hay bales as “hurdles”), my lungs were searing.

At the end of Lap #1, Eddie (who was watching on the sidelines) yelled at me, “You’re in 8th place, buddy!” I’d lose a few more places by the end of the race, by which time I was sucking wind harder than a trombone player tooting the flute.

At least getting through the mud-pit was no problem for me. This is because instead of crawling or doing the limbo underneath the orange netting, I lifted it over my head as I stayed on my feet and continued running. (You may begin the barrage of “that’s cheating!” comments.) However, I did have to side-step or jump over many other runners who were on all fours or had done a faceplant in the mud. The second and third times around the course I was lapping people, so there were plenty more human obstacles as well.

Ultimately, I finished around 12th place and was handed a large beach towel at the end with a muddy Teva logo on it. Afterward, Jeremiah (who was spectating) exclaimed, “WOW! You really looked like you were in pain!” In truth, due to the altitude and the hills, it felt like I had almost blown out a lung.

But at least I managed to stay pretty clean. Many of the other runners looked positively like mud monsters afterward.

Later in the day, it was Eddie and Lisa’s turn to race—but on mountain bikes. The cross-country MTB course—rumored to be just under 6 miles long—looked plenty steep and each of the racers were already riding uphill a few seconds after starting the race.

Eddie rolled in after 42 minutes with his cycling jersey completely unzipped. He finished second in his division, and couldn’t muffle a chuckle when he learned this. “I crashed THREE times,” he stated while shaking his head.

Lisa also did great, finishing 5th in her division. “I really surprised myself,” she said shortly after she dismounted her bike.

The next day, Eddie ran in a hilly trail race. Even though it was dubbed as “the toughest 10k race in the nation,” I didn’t fully understand the extent of how difficult it was and predicted that Eddie—who usually would complete a “normal” 10k in around 45 minutes—would need around 53-55 minutes for this race.

In fact, Eddie needed an hour and eight minutes to cross the finish line. When I walked up to him after he did, he was hunched over and panting and muttering something about hills and technical singletrack.

“Heck yeah!” he said. Nevertheless, he still finished an impressive 9th in his age group.

A couple hours after Eddie’s 10k was the event I was looking forward to for weeks: a 9.8-mile climb up Vail Pass on my road bike. This was a marquee stage in the defunct Coors Classic—formerly America’s premier bicycle stage race—which cycling legends such as Greg LeMond, Bernard Hinault, Andy Hampsten, and Davis Phinney had conquered.

The hill climb in the Teva Mountain Games was conducted in a similar staggered-start, time-trial format, and at my allotted time, I rolled off the starting ramp and down a barrier-lined road that led to a short climb towards I-70 north of Vail Village.

Unfortunately, just one minute after I started, I got off course!

I was supposed to make a right turn onto a Frontage Road, but there were no arrows or people telling me to do so. Instead, a policewoman had stopped traffic to allow a car to make a left turn, and since I saw another cyclist (apparently not part of the race) go in that direction also, I made a left turn. The moment I did, I already had a bad feeling and was sure I was off-course .35 miles later when I hit a roundabout.

I headed back in the opposite direction, only to be stopped by the aforementioned policewoman at the spot I should have turned right (“but I’m part of the race!” I said to the officer), and had extra adrenaline pumping through the veins by the time I was allowed to proceed and back on route.

The errant turn cost me over three minutes. What made getting off-course even more aggravating was that the conditions were great with little wind and no rain or hail until after I finished the race, and that physically, I was feeling phenomenal.

In fact, I caught and passed at least a dozen racers, and not a single person passed me. The climb was gradual enough that I was in the big chainring most of the way and only had to resort to the granny gear on two occasions towards the end when the climbing got steeper.

A quarter-mile from the finish were orange cones and people cheering. Another racer I was passing seemed to let up suggesting that the race was over so I yelled out, confused, “Is that it?” He replied in the affirmative but after seeing that I had virtually stopped pedaling, corrected himself and said, “No, almost there” after which I started pedaling like crazy again. Second brain fart of the day.

Ultimately my final time was 40 minutes and change, or 6th place in my division. If I hadn’t lost those three minutes by getting lost, I would have easily finished second. First place was probably unattainable but considering that I still had something in the tank when I finished and that I clearly didn’t know the course well, I figure that 35 minutes would be a reasonable goal for next time.

We had a great time at the Teva Mountain Games and agreed we’d probably be back next year. In my case, I definitely want to give the Vail Pass Hill Climb another shot and—if it’s there next year—the GNC Pull-Up Challenge. I’m not sure whether I’d do the Mud Run again, but doing one of the other races on foot (either the 10k or half-marathon) is not out of the question if there’s at least one day to recover between that and the Hill Climb.