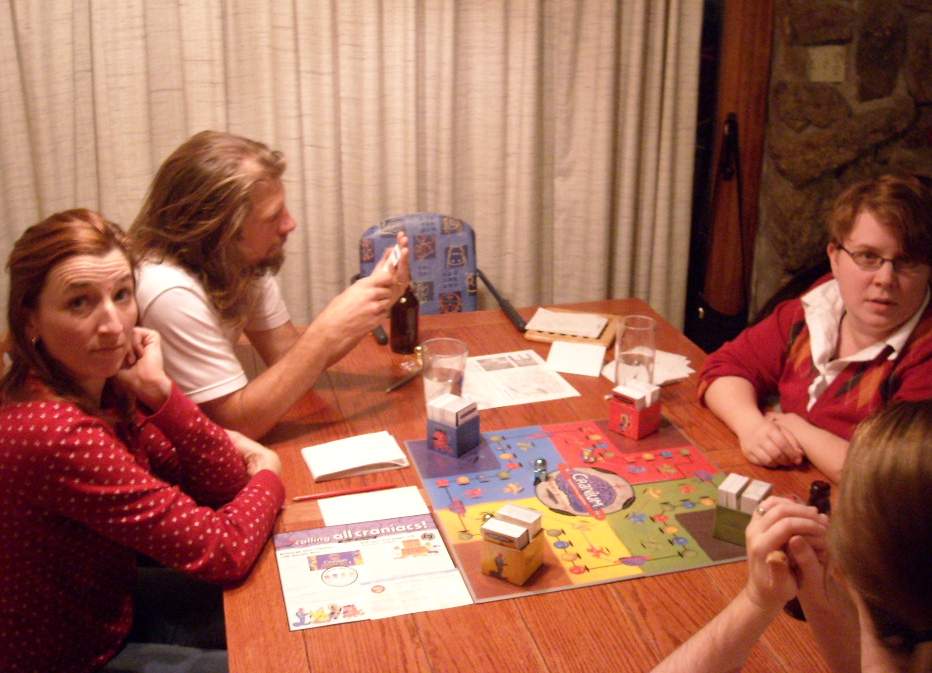 You would think that for a person merely responsible for preparing a salad and bringing over some bread would not be in a mad rush to get things together 15 minutes prior to departing for a Thanksgiving dinner. But there I was, practically running through the nearest grocery store (Albertsons) due to discovering at the last minute that I had an acute shortage of lettuce.

Tori—who was a bit (ok, a lot) more prepared than I and had completed her grocery shopping a full two days before—was also having a small “issue” when I arrived at her place en route to Nick and Dana’s home. Apparently, her cranberry dish was not solidifying quite fast enough and therefore she had chucked it into her freezer. Upon arriving at Nick and Dana’s, we stuffed it into the freezer again, and it gelled just enough by the time we had a 4:30 p.m. dinner.

Fortunately, Nick, Dana, and Dana’s friends Corinna and Sei seemed to have no last-minute food preparation problems of their own, and we had a wonderful dinner consisting of butternut squash soup, various birds (chicken, pheasant, and cornish hen), sausage, rolls, some sort of lasagna-like dish, a delicious recipe consisting of green beans and some other vegetables, and yes, Tori’s cranberry dish and my bread and salad.

After dinner, a brisk walk and dessert (cookies and a peach cobbler, I think), we played games which I again seemed the least ready for. The first one was what Nick described as “the Parlor Game” because it is a game commonly played in British pubs.

In essence, it entailed writing 20 agreed-upon letters on a piece of paper and hiding those letters by folding the paper in thirds. Then, we had to write down 20 agree-upon categories in sequence. Finally, for each letter-category pair, one had seven (eight?) minutes to write down a word starting with the specified letter that was part of the corresponding category. For example, for the letter ‘H’ and category ‘U.S. States,’ one could write down ‘Hawaii.’

Points were awarded depending on 1) whether one’s word in fact started with the specified letter and was part of the corresponding category, and 2) how many other people wrote down the same word. Unique answers were awarded the maximum points of five, whereas answers given by two people were awarded four points and so on.

To say that neither Tori or I did not do very well in this game is like saying the L.A. Clippers are historically not the greatest team in basketball. For example, I was awarded points for a measly seven of the 20 letter-category pairs. This was something I protested loudly, especially for cases including the following:

In fact, I was doing so poorly that at one point Nick felt compelled to tell Corinna and Sei that “Felix is actually a Stanford grad,” much to the dismay and disgrace of my alma mater all around the world, I’m sure.

When we tabulated our scores, I expressed shock and joy that “I actually got 29 points!”—or only six less than Tori. But my pleasure evaporated quicker than dry ice when Nick, Corinna, and Sei revealed that they each got 70-80 points; that the total amount of points possible was 100; and therefore, if this was a high school exam, I would have gotten an ‘F’ and possibly even expelled from school.

The next game we played was Cranium, and to Nick’s absolute dread (I’m sure), he got stuck on the team with Tori and me. But the know-nothings actually began to redeem themselves, particularly since there were a couple of automobile-related questions that of course I knew the answers to and because Tori was able to draw pictures pretty well for the challenges that required someone to draw. So we only barely lost the first game due to extremely poor dice rolls, and might have even won the second game had there been enough time to finish.

All in all, it was a very fun Thanksgiving—certainly the most memorable one I’ve had since moving to the Fort. I was particularly thankful that I got to spend it with my two favorite friends living in the Horsetooth area, and of course my very best friend in the whole world, Tori.

Yes, even though she refused to award me any points whatsoever for ‘pit bull’ or ‘Starry Night,’ that thief.

Great photos. TELL NICK TO GET HIS HAIR CUT BEFORE HE ARRIVES IN UK. THEY MAY NOT LET HIM IN.