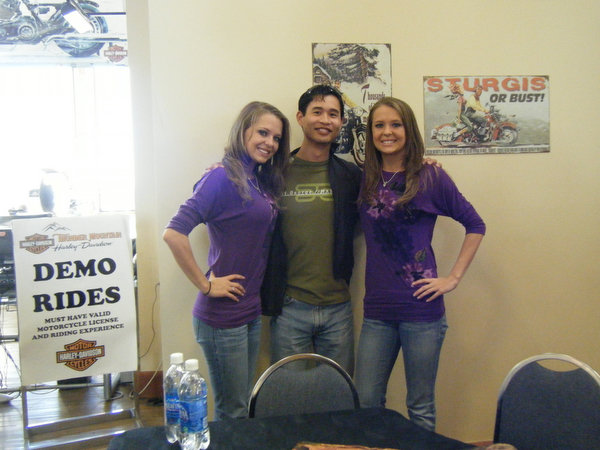 “Maybe you could join us for lunch at one o’clock tomorrow,” I suggested to my dear friend as we cruised back from Thanksgiving dinner. “Before then, I’ll be at a motorcycle shop to check out the bikes and meet some celebrities.”

It just took one of her raised eyebrows—followed by her flatly muttered “oh”—to confirm what I suspected all along: Tori was NOT interested in meeting any Playmates. Or checking out motorcycles for that matter. Don’t ask me why.

On the other hand, my friend Eddie was decidedly more excited when I forwarded him a Fort Collins Now article with my comment, “I have no idea how this is major news.”

“THIS,” Eddie immediately wrote back, “is what the world needs. GOOD NEWS!” I couldn’t agree more so we decided to head down to Thunder Mountain Motorsports, a Harley-Davidson shop where 22-year-old former Greeley residents Jennifer and Natalie Campbell were scheduled to do a signing. After all, I ride a naked American sport bike powered by a Harley single, and as much as I love my Buell, I sure wouldn’t mind taking a look at some new ‘twins.’

We ambled into Thunder Mountain not exactly sure where to go at first, but our discombobulation was instantly cleared when we spotted a queue leading to the rental department almost as long as that at Dunkin’ Donuts during lunch hour. Sitting in front of this line of mostly women and children (!) were two pretty brunettes wearing long-sleeve lavender shirts and grasping pens in their hands. Actually, as Eddie and I chatted in line I didn’t really notice them until about five or ten minutes later, when I found myself standing right in front of them.

“Well hey there,” I greeted the ladies as Eddie took a few steps back with camera in hand.

I proceeded to make small talk with them, e.g., which one of you is Jennifer, who’s Natalie, you’re so gorgeous, etc. I focused on their faces and basically did whatever I could to prevent myself from fixating downwards on the literally dozens of Playboy magazines opened up to their completely nude, but tastefully done, centerfold layouts. This worked until the two hotties started signing one of the spreads for me, and I contorted my head to read what they were writing in beautiful, cursive font that would have easily garnered an A+ for penmanship in fourth grade.

“To Felix, With Love,” wrote Jennifer. “To Felix, Much Love,” signed Natalie. And my first Playboy magazine (cover price: $7, no less). How sweet of them.

The two Misses December 2008 then graciously posed with me as Eddie kindly snapped a half-dozen photographs. While we were posing, a person in line exclaimed, “Hey, that guy in the middle makes the two ladies look good!” We all got a good laugh out of that one.

Then, it was Eddie’s turn, and from the look on his face, I could tell that he was going to be in a good mood for the rest of the day.

We had about ten more minutes before having to go meet up with Tori, so we strolled around the showroom floor to check out sterling examples of American iron and chrome. Any feelings of bike lust, however, were quickly extinguished by the big dollar signs dangling from the two-wheeled machines, some exceeding 30,000 smackers.

“What would you rather have—a Mini Cooper S or one of these,” I asked Eddie. “Because this is about how much one would cost.”

My roving eye did appreciate the slick lines of a H-D V-Rod and the elegant simplicity of the entry-level Sportster, but ultimately, the cruiser brethren of my Buell gave me fewer heart palpitations than, say, a sexy Ducati, a modern Triumph Daytona, or the high-strung exhaust scream of a Honda CBR600F4. Or even my own Buell. As with women, my preference for motoring machines still resides with the lithe, nimble, athletic, sweet sounding and smart versus the large, boisterous, powerful but inefficient.

Ironically, I got the impression that the Miss December Playmates were more like the former, being educated Colorado natives who liked to play in the snow and lacking the hard edge of a (relatively) thirsty, heavy, and technologically primeval Harley-Davidson. Plus, from the minute or two I got to talk with them, they actually seemed sweet and nice unlike the typical I-like-to-wake-up-the-entire-neighborhood chrome-pipe Hog.

Motoring preferences aside, I’m glad we had a chance to come out and take a look at the new models. Indeed.