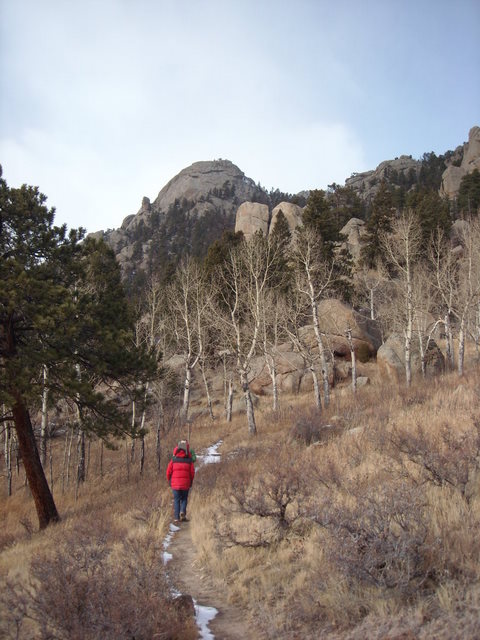 Good thing Tori was in town this weekend. Otherwise, instead of hiking a few miles on rolling, snow-covered trails at Lumpy Ridge, Nick might have coaxed me into running 10.

Or maybe even more.

“Where’s Nick?” we asked Dana when we arrived at her home at 10:00 in the morning. The plan was for all of us to drive to Lumpy Ridge together and then go hiking while Nick ran ahead on the same trails.

“He’s running,” Dana replied. It turns out that the 10 miles Nick was originally planning at Lumpy Ridge was not enough, so he decided to run an additional 10 “very hilly” miles at another location with a friend before heading to Lumpy.

In any case, it turned out to be a fun day. Dana and baby Alistair decided to come hiking as well, so we all packed into The Banana (Nick’s yellow Nissan XTerra) and drove over to Lumpy Ridge, located just north of Estes Park and on the outskirts of Rocky Mountain National Park. One nice thing about Lumpy Ridge is that one doesn’t have to pay $20 or whatever it costs for a one-week pass to RMNP.

Another great thing about Lumpy Ridge is that it is a famous climbing area, which peaked Tori’s interest. Mine too, although I was looking forward to just being out in the fresh mountain air near RMNP as well. Aside from my initial scouting trip in 2005 which I drove through the national park to get to Fort Collins—and a half-day side trip there in May 2006 when my friends Kathrin and Guy came to visit—I haven’t been back here even though it is not too far (about 40 miles) from home.

Dana, Alistair, Tori and I hiked for about two hours, and midway through Nick’s run he decided to turn back and join us as well. The snow was only about an inch or two deep in most places on the trail—not so much as to slow us down during the hike but enough for Tori to make a snowball and throw it at my butt. I’m not certain what inspired her to do that but perhaps it was Batman, not Robin’s mentor but the name of one of the rock formations in the distance.

Afterwards, we drove to Bob & Tony’s Pizza in Estes Park. The pizza was decent (definition: “better than what Felix can make”), at least after hiking five or so miles.

Nick would probably point out that it would have tasted even better after running 15-20 miles, but that’s ok, it’s winter.