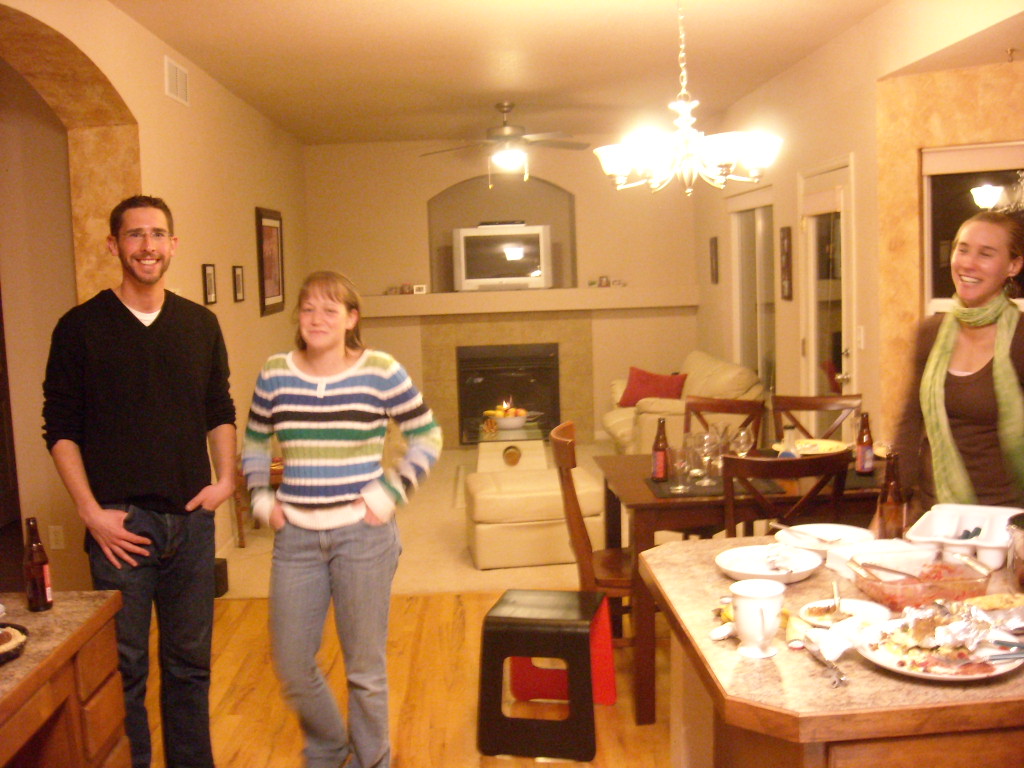 “How are you doing on the turkey?” asked Tori the day before an early Thanksgiving dinner among a dozen close friends at my place. “I realized you [probably don’t have enough space in your] fridge to defrost it in for the normal three days. How did you work around that?”

Three days? I didn’t even have the big frozen bird yet. Then I read on the Internet, “The only safe way to thaw a frozen turkey is to place it in the refrigerator,” and soon I was panicking as much as a turkey being chased by a fox.

Well, almost. After more Internet research and conferring with Raquel who had actually prepared a turkey before, I was convinced that the “cold water method” was a safe and effective method to defrost a turkey in approximately six hours. Ultimately, however, I ended up purchasing a 13-pound fresh turkey. Thawing problem solved.

On the day of the party I baked the turkey with rosemary, melted butter, and salt and pepper, filling the house with a wonderful scent of roasted fowl. Fortunately there was no more drama aside from a minor “issue” of turkey juice exploding all over the inside of the oven when I tried to reposition the oven bag after checking the bird for doneness, unless you count my attempts to pass off the carving responsibility to one of the other guys who happened to be vegetarians. Rob graciously accepted this duty after my pathetic pleas and some prodding from Tori.

The rest of the night was enjoying the company of dear friends and eating lots of food. Everyone brought a dish (or two) so in addition to the turkey we had a salad, stuffing, a cranberry dish made with wine, quinoa, stuffed potatoes, another potato side dish, and spinach dip with bread. Desserts included chocolate pudding pie, cranberry crisp, a cake, and chocolate pecan pie.

Tori also had quite a few “Felix food stories” for us, like my failed attempt to make coffee with her one day when she was visiting and how I once “discovered” waffles in my tiny freezer and then promptly caught them on fire in the toaster. Shortly after her stories we discovered that the ground coffee I did have expired last year, and a “bomber” bottle of Fat Tire beer I was given after the Horsetooth Half Marathon had an expiration date in 2007. I guess that proves I am neither a coffee addict nor an alcoholic. At least wine doesn’t expire, right?

But all in all, I’d say the pre-Thanksgiving Gobble Gobble was a success. I may even volunteer to make the turkey again next year, now that I am virtually an expert.