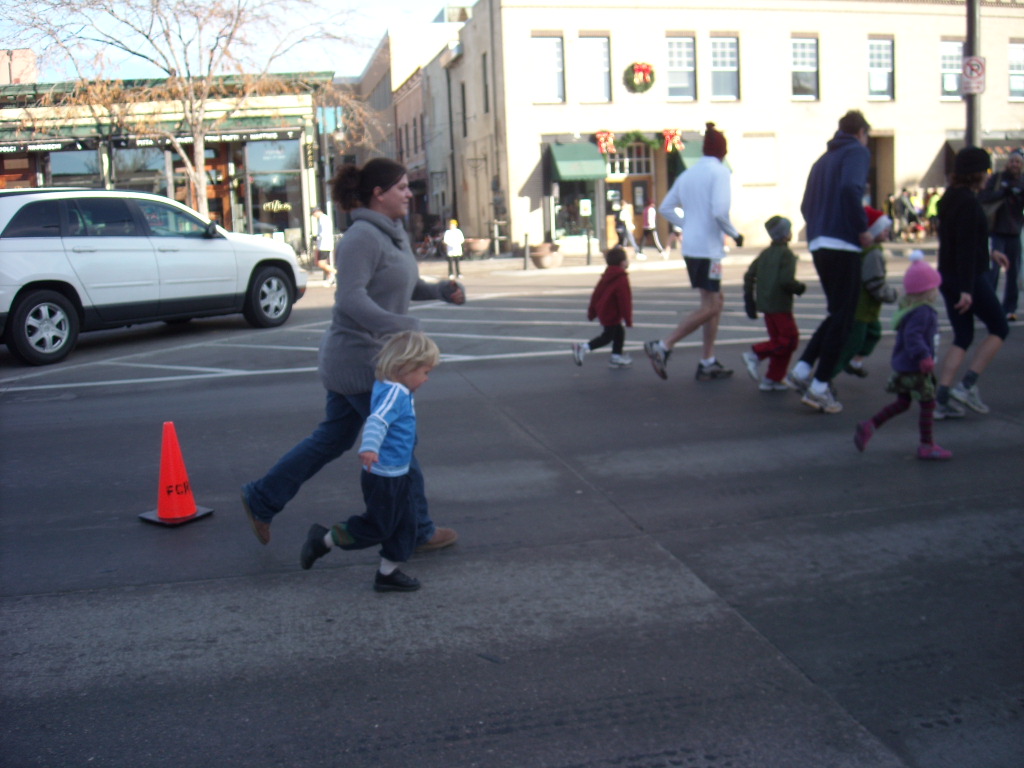 Considering the phenomenal year Nick has had in running (five first place finishes, five seconds, and two thirds in distances ranging from 10 kilometers to 100 miles), the only question in my mind was whether he would win a pumpkin or apple pie for finishing in the top three in his age group in the four-mile Fort Collins Thanksgiving Run. That and if I was going to run the race too. Given the prize money and consequent depth of the field (2,000 racers including Olympic-caliber marathoners), there was no way I was going to win a pie nor finish in even the top 10 in my age group. Plus, I had hardly been running in the last couple months. Maybe it was better to be a spectator with a warm cup of hot chocolate instead.

Indeed. So two days before the event I signed up online and the morning of the event I reunited with Nick, Raquel, and their respective families in a coffee shop. Rob and Dana would be cheering, but even three-year-old Alistair would be doing some trotting today. In fact, his event—the free, 3/4-mile kids run dubbed the Gobble Gobble—was first.

Dana, Nick and I escorted Alistair to the start, while Nick joked, “Ok son, I have high expectations of you!” Good thing he wasn’t serious as we arrived at the start line about 30 seconds late and the other kids got a 100-foot head start on Alistair. It was a funny race with adults trying to keep their kids not only on their feet but heading in the right direction and others offering encouragement of “you’re almost there!” after only 2-3 minutes of running.

Afterward I headed into a throng of grown-up racers when all of a sudden a brunette looked at me and exclaimed, “I know you!” It turned out to be Rebekah, someone I never met before but had heard about from mutual friends. (“We have 18 mutual friends on Facebook,” she mentioned.) In this happy moment of finally meeting each other we posed for her husband’s camera and socialized long enough that we were completely taken by surprise when the race began and everyone started running like wild turkeys. “Have a great race,” I said before spinning 180 degrees and bolting forward, already behind ten rows of other racers.

It was just as well as for this race, I wanted to try starting out slower and run the second half of the race faster. In years past I’d take off like a hyperactive kid who had overdosed on M&Ms, only to experience the same crash and burn that occurs after the milk-chocolate sweetness had worn off. This year I was determined not to fade so much in the final mile.

So starting behind at least 100 runners had the positive effect of making me run the first mile a little slower than I might have otherwise, but still at what I considered a pretty decent pace (6:31). The second mile was a gradual 1.3% uphill on Mulberry Ave., but nevertheless my mile split was a tad quicker (6:26).

The second half was a bit more exciting, as it was predominantly downhill (elevation loss of about 75 feet) and—more importantly—unlike in previous years, I didn’t feel like I was already pushing my cardiac limits. So I was able to put in several mini-surges running at 6:14/mile pace until about a quarter-mile to go, when my I was inhaling and exhaling with every two steps and I was focused mainly on not fading and trying to decide when to put in a final kick.

It was there that a woman whom I did not see earlier in the race caught and passed me while remarking, “This is just like the Crossroads Half Marathon.” I then remembered her as the masters runner who caught me at Mile 10 in that race and ultimately beat me by 57 seconds. And here, once again she was getting a step on me late in the race.

I kept her in sight and stayed within 15 feet of her by the final corner. Then, with 100 meters to go I started my sprint, passing her and another guy. I didn’t let up until I had safely stepped over the final timing mat and clicked off my watch. Final time: 25:24.

This was over a minute faster than last year and first time I finished in under 26 minutes, all with much less training than in past years and having eaten a bit too much this week. Hence, I was very pleased. So was Raquel, her father, sister, and brother-in-law—all whom I encountered after the race and had completed the race in less time than they were expecting and seemed to have a lot of fun.

Nick—who stepped over the finish line minutes before me—also had an exciting finish. For most of the race, he was leading all the top women until the final corner, where they commenced an all-out sprint to the finish. Nick has good sprint speed but he decided not to be “childish” and took the more gracious approach of stepping aside and letting them duke it out. So within the last 100m, he was passed by no less than four women, all whom finished within two seconds of each other and a couple more in front of Nick. (See Nick’s write-up.)

But he left the event with a great consolation prize—the giant pie he said he was going to win—for finishing second in his age group. The pie was filled with apple. It looked like Alistair would get to do more “gobble gobble” later that night.