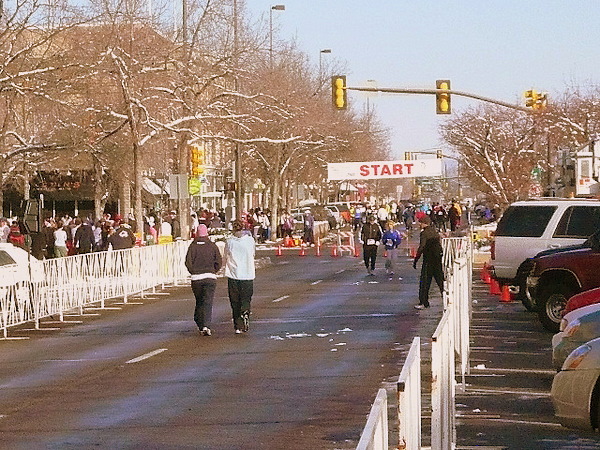 “This will be another data point,” I wrote to a friend a couple of weeks before the race, “to see how much slower I get by not running for three weeks.”

My last race was the Edora Park 8k, which I had concluded that I did not get significantly slower by not training during the three weeks before that. In between that race and this morning’s Fort Collins Thanksgiving Run, I had run exactly three times in 18 days, which constitutes “not training” in my book—especially when two of those runs were 2.5 miles long.

Funny how that was the last thing on my mind the day before the race when Fort Collins got its first snow of the season—and race temperatures were forecast to be well below freezing.

Now the question was could I run a decent race in the cold? Have I ever? I can think of two races—the Lee Martinez 10k and the Heart Center of the Rockies 10k—that were virtual disasters, performance-wise, like an old Trabant stumbling from Point A to Point B during the former East Germany’s bitter winters. The only cold race where I performed near my potential was perhaps the 2006 Chicago Marathon, and then again the temperature was 39 degrees Fahrenheit—at least above freezing.

The frigid temperatures played havoc with other planning, too—specificially, What The Heck Should I Wear. Last year in this race, I wore a tank top and shorts. I was actually planning on doing the same today (along with wearing gloves, arm warmers, and a headband), regardless of the weather forecast, but after I stepped outside I instantly reconsidered. Better wear at least a long-sleeved shirt and some pants!

Enough of the pre-race details and thoughts, though. Here’s how the race went:

There were over 1200 runners, and I started too far back from the front and lost a bunch of time weaving through crowds in the first half-mile. The roads were wet and icy in some sections. At the first turn, we passed a bank that prominently displayed the temperature: 17 degrees. Not Ideal. At least it was sunny, though, so it actually felt a bit warmer.

Today was not the day to start like a jackrabbit so I just concentrated on good leg turnover and keeping my breathing fairly relaxed. That was hard to do when each breath of cold air was searing my lungs. Still, my spirits were buoyed when I passed by the two-mile mark, and my watch read 13:05 (6:33/mile). Surprise! This could be a decent race after all.

The next 1.5 miles, some other guys (and some women) caught up to me, and during this time I was running side-by-side with somebody. Yet, all of them seemed to be breathing much harder than I. So with about a half-mile to go, I started to pick up my cadence just a eensy bit, and pulled away.

I commenced my trademark sprint with about 150 meters, focused on some dudes about 30 meters in front of me, and passed both of them just a few steps from the line. Done! Final time: 26:09 (6:32/mile). This was a little faster than last year‘s 26:26, and the average pace was only six seconds off my 6:26 pace in the Edora Park 8k a few weeks ago despite the cold, crowds, slick areas of the course, and extra clothing to bog me down.

Conclusion: while I’m not getting faster, I’m also still not getting significantly slower by not training like a maniac. Hmmm, the off-season is now looking warmer and brighter regardless of what the temperatures are doing.

Total time: 26:09 (6:32/mi)
Placing: 85/1210 overall, 11th in age group. A lot of fast people from all over the state participated today, no doubt due to the thousands of dollars of prize money and pies for the winners!