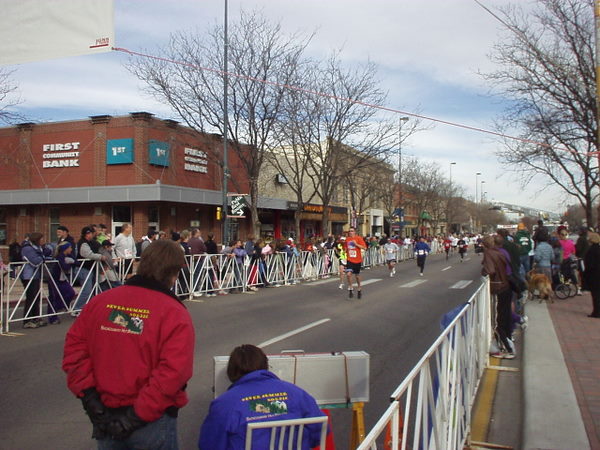 Today is the 4th Thursday of November, which for me means carrying on this Thanksgiving tradition: running around like a turkey and making “gobble gobble” sounds.

Just kidding about the latter. I didn’t have to when there were plenty of kids doing so for the “Gobble Gobble” 0.5-mile kids run in Fort Collins, which preceded the more mature (but boring-sounding, name-wise) “Thanksgiving Run” by 15 minutes.

Thankfully the 4-mile run was a bit more exciting than its title.

At least 1370 runners showed up, including some really fast people from Santa Fe, NM (who ended up winning both the male overall and masters’ grand prizes) and even someone from Namibia (he came in 9th). How did a town of 130,000 people like Fort Collins manage to get this caliber of runner to turn out for what was the largest Thanksgiving run in Northern Colorado ever? Bribe them!

Look at the purse for the top 5 men and women overall:

There was money available for the top masters runners (those over 40), too. The awards didn’t end with dinero, either. For top age-groupers, there were also pumpkin pies.

Alas, even among my age group there were too many people running sub-6 minute miles, so no pie for me. I was pretty happy with how the race went, though:

About 15 minutes before the start off of College Ave. in Old Town, I stripped down to a singlet, running shorts, and some thin liner gloves. Then I proceeded to near the front of the starting area, where I saw my friends Tom and Diana.

At 9:00 the race promptly started. Not having run too much lately and lacking the confidence to try to stay with the front-runners for even a little bit, I decided to start out conservatively and try to pick up the pace the last half of the race.

It sort of went like that for me. The first mile I felt comfortable with springs in my legs, running a 6:34. The second mile was more rough. It was more of an un-lively feeling than something that could be pinpointed to, say, lungs, stomach, or legs. I barely wheezed through that mile under seven minutes.

I did recover enough for the second half, averaging 6:27 over the last two miles. This average was abetted by beginning my sprint just outside the Rio Grande Mexican Restaurant (where, before I even started the race, I resolved to start kicking from there), maybe 50 meters before the Mountain/College Ave. corner leading to a 200-meter finishing straight.

Overall average: 6:37. Basically, the same overall pace as my last 4 out of 6 races between 5-8 kilometers in Fort Collins this year. Well, at least I’m consistent!

Afterwards, inside Old Chicago, I encountered my friends Dana and Nick (with baby Alistair), and we chatted for a while. Nick was one of the sub-6-minute milers in our age group, but even he missed out on the pies, coming in 5th. Oh well, it was enough for us to be running around like turkeys without having to carry back a whole pumpkin-flavored dessert afterwards.

Felix! Way to fly! I'm in Oregon where I haven't even SEEN a runner let alone ads for a race. Thanks for your news and photos. I hated missing the trot. ↩Reply