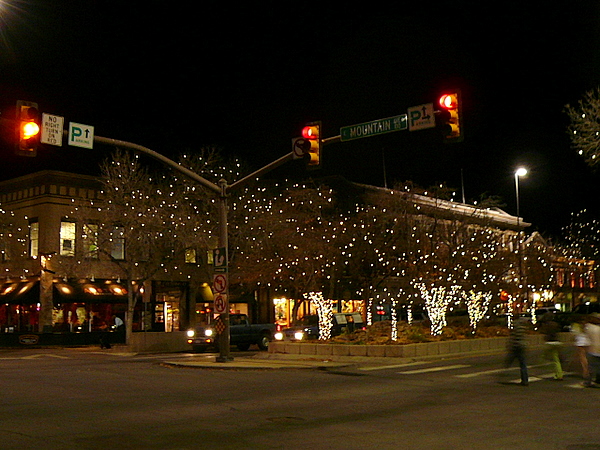 Even as the mercury in thermometers dip below the freezing line during the nights at this time of year, Old Town Fort Collins is still a pleasure to visit after dinner time. One reason for that is every year around the first week of November, a whole crew of people with cranes and ladders hang strands of tiny white lights on trees and posts lining the streets of downtown. Then, for three months, the center of Fort Collins looks like it is being blanketed by millions of fireflies, and suddenly one feels an urge to run down to Ace Hardware to buy his own strands of lights for his home to join the festive spirit.

Or did I say lights? Ahem! This year the sparklies downtown actually look much whiter than in the past, and for good reason. Fort Collins—a city that prides itself for its greenness—invested in strands of LEDs (light emitting diodes), which are much more expensive than incandescent lights at the outset, but are reusable for future years. They also use 90-98% less energy, which should come as no surprised to any cyclist used to getting 150 hours worth of burn time from his rear blinking LED lights, or 15-30 hours from his front LED bike lights, with just two or four AA batteries.

The Coloradoan had an article that briefly went into the economics of such a change. This year the lights display cost us $150,000, but should only cost ~$75,000 in future years. It is unclear from the article whether those figures include the electricity to power them, and how much the incandescent light displays cost in the past. But from an environmental standpoint, there is no question which option is better.

Now I am thinking about putting up my own holiday lights display at my house. I’d get LEDs too, though the cost of my display will likely be closer to $15 instead of $150,000. Hmmm, I wonder what time the downtown Ace Hardware store closes…

Update 11/27/07: Woah! It appears that all stores in eco-friendly Fort Collins are out of LED lights, at least according to the Coloradoan! Hmm, I may have to resort to eBay… or just don’t put up lights this year (again!)