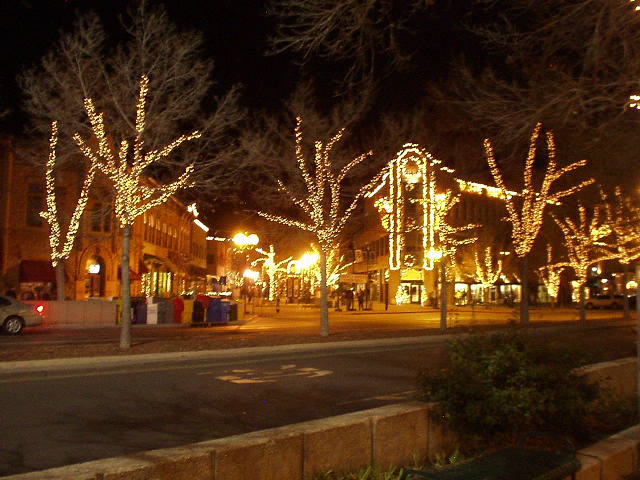 There’s been something of a controversy in Fort Collins this year when our City Council overwhelmingly voted to allow only unattended secular holiday symbols in public (i.e., government-owned) areas of Old Town. This means that symbols such as the menorah cannot be placed on public lands except when attended during, for example, ceremonies such as Fort Collins’ annual Lighting of the Menorah.

The rationale behind this is to maintain separation between church and state and to avoid sponsorship of certain religions over others. After all, our government is supposed to represent a taxpayer base replete with agnostics, atheists, Buddhists, Catholics, Christians, Jews, Muslims, Unitarians and many others, and to only show a menorah without the other religions’ symbols would be favoritism to Jews over, say, those who celebrate Kwanzaa and would love to see a kinara downtown too.

You might suspect, then, that in absence of religious traditions our downtown looks quite gloomy for the holidays. Au contraire! There are Christmas lights everywhere! And there’s a big X-mas tree too, supposedly (though I have not found it yet). So merely driving though Old Town is a joy to behold in December and January!

But wait, you ask. Aren’t Christmas lights and a tree religious symbols? Actually, they have been ruled to be secular numerous times by our nations’ courts. The X-mas tree has pre-Christian pagan roots, and the lights were not first conceived by an organized religion, but rather Edward H. Johnson, an associate inventor of Thomas Edison.

In fact, Christmas itself is largely secular, being influenced by the ancient pagan customs of Yule and Saturnalia, and celebrated by millions of non-religious Americans and “false Christians” (e.g., those who claim they believe in Christ even though they have not even read the Bible and hence have not seen/reconciled its rampant inconsistencies and questionable moral teachings). Furthermore, religious scholars agree that Christ wasn’t even born on Christmas Day, not to mention that X-mas has been transformed into a spectacle of commercialism/materialism that the Christian god—were he any less imaginary than Zeus, Poseiden, or any of the other thousands of gods humans have made up over time—would probably not have approved of. (“No one can serve two masters. Either he will hate the one and love the other, or he will be devoted to the one and despise the other. You cannot serve both God and Money.” -Matthew 6:24)

But enough of the history lessons. In any case, I think Old Town looks great during the holidays!

"You cannot serve both God and Money."

But it doesn't stop the Republican party from trying...

Remember last year's alleged War on Christmas? Annotated Rant did a page dedicated to it, here...