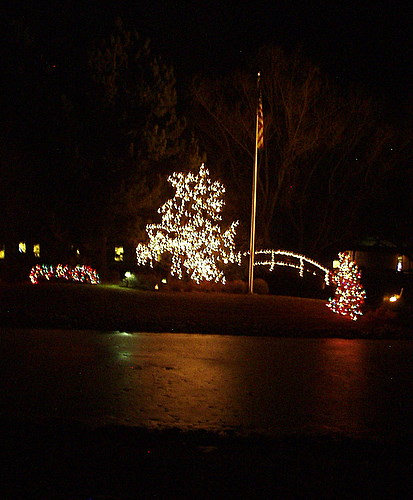 It’s that time of year again to start frantically scribbling greeting cards to long-lost friends, looking for the perfect present for the significant other, and squabbling over whether Wal-Mart should be greeting us with “Merry Christmas” instead of “Happy Holidays” this year. For others, it entails waking up at 5:30 in the morning for a Wii video game console and then starting fights when the store runs out of them. Happy holidays, indeed!

Personally, I think Allison and Art of the Fort Collins Running Club have a better holiday tradition: a Christmas Lights Run!

First, let me clarify what exactly is a Christmas Lights Run (or at least Allison’s version of it). It is NOT running over to Wal-Mart to buy some x-mas lights. It is also not running around like Rudolph the Rednose Reindeer with lights attached to one’s body, even though this is exactly what FCRC member Roger did using an ingenious system of 3V miniature light bulbs and two C-cell batteries. (Cathy was also running around with red LED blinkers like those designed for the tail end of a bicycle, but I think this was more to avoid getting run over.)

It is running around cul-de-sacs and neighborhoods admiring all of the different display of lights hung by the merry citizens of Fort Collins. Amazingly, it seemed like two out of every three houses in the neighborhoods we went through had some. This is a far cry from the one out of every five or so in Fremont, California—the city I used to live in where people are generally way too busy to deal with such frivolousness as colorful blinking lights.

We had a wonderful time, especially since we were all very happy to interpret the definition of “running” quite liberally today. Rather, most of the time we were just jogging along, stopping occasionally to point out displays (“look! I think that is supposed to be a candle”) and posing for photos in front of particularly well-done light exhibits.

We even sounded the part and “jingled all the way” as some of us wore bells. Whether we successfully fooled some kids into thinking that Santa and his reindeer-lead sleigh were coming down their streets is unknown, but we tried our best.

Perhaps the best x-mas lights displays were not on a house, but on Woodward Governor’s premises. Woodward Governor (not to be confused with the Watergate scandal or the leader of our state) is a manufacturer of aircraft engine energy control systems. There were enough lights there to light up an entire city in North Korea.

After the 4.5-mile run, we returned to Allison and Art’s home where we had a potluck! Each of us brought a dish and there would have even been enough food if Santa himself had stopped by to join us. While gorging myself with food, I enjoyed talking about motorcycle touring with Allison’s co-worker Tom, about snowshoeing with another Tom, and how Cathy will be vacationing in Africa next month, including a climb up Mt. Kilimanjaro!

All in all I believe this was a near-optimal way to celebrate the holidays, and certainly beats scurrying around Toys ‘R Us for kids toys and wrestling with other patrons for one of those Wiis.

This is the approximate route we took.

Hi Felix! Thanks for the Lights Run photos. What a nice evening it was. Allison ↩ Reply

Felix! You are amazing! This was such fun to see and read. Thanks, thanks from the blinker gal who didn't get run over! Merry. Merry. ↩ Reply

Thank you for the photos, we all enjoyed! ↩ Reply